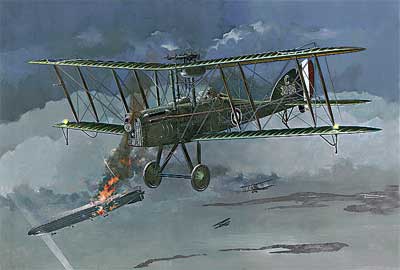 This product was added to our database on Friday 7 july 2006.

At the start of the First World War the B.E.2 family of two seaters built by the Royal Aircraft Factory was one of the most numerous used by the Royal Flying Corps, and they were employed in a great variety of tasks. When it became clear in 1916 that single seat designs were the future for fighter types, the B.E.2c was taken as the basis for the creation of a new single seat fighter.
In order to minimize any delay, it was decided not to make fundamental changes in the design; the main difference was a fairing over the forward cockpit. The single seat version received the name B.E.12 and in August, 1916 the first production machines were sent to operational squadrons at the Western Front. Sometime later appeared the improved B.E.12a which was based on the B.E.2e variant. Both of these types had the R.A.F.4a engine with a capacity of 150 h.p. Quantities of B.E.12 and B.E.12a were operated by Home Defense units, but from the first interceptions of German airships, the type's inadequacy for the task was clear, because of its poor climbing ability. One small success was achieved however, namely the destruction on the night of June 17th, 1917 of Zeppelin L.48.
Pilots were less than impressed with the capabilities of the B.E.12 and B.E.12a, and consequently it was decided to create a new version better suited to the needs of anti-aircraft defense, utilizing the more powerful 200 h.p. Hispano Suiza engine which was already fitted in another well known fighter - the R.A.F. S.E.5a. The result of this new development was the B.E.12b, which was reminiscent of the S.E.5a because of the outline of its forward fuselage, its radiator and long branching exhaust pipes. The contract for construction of 200 machines of this type was awarded to the Daimler Company, which already had experience of constructing the previous B.E.12. Due to numerous delays in delivery of the engines which were also required by the S.E.5a, manufacture of the B.E.12b only began at the end of 1917 in parallel with extended production of the B.E.12a. In the end, Daimler built around 150 of the B.E.12b out of an initial order for two hundred.
Planes were allocated to Home Defence squadrons in small groups at a time. In February, 1918 manufacture of the B.E.12b was ended. Planes were based in and around the suburbs of London: their basic purpose in the summer of 1918 was the interception of German bombers, and after the end of the bombing raids on the British Isles the B.E.12b switched their role to that of coastal patrol. At the end of the war in the ranks of the Royal Air Force there were 115 machines of the B.E.12b type, the majority of them deactivated or transferred to training units.