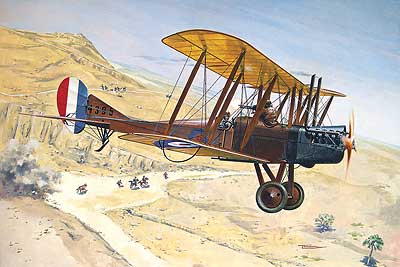 This product was added to our database on Tuesday 17 April 2007.

At the start of the First World War the B.E.2 family of two seaters built by the Royal Aircraft Factory was one of the most numerous used by the Royal Flying Corps, and they were employed in a great variety of tasks. The first B.E.2c appeared at the Front at the beginning of 1915. Its basic tasks in the sky of the Western Front were reconnaissance, artillery spotting, and the bombing of enemy troop formations. This variety of two seat aircraft, with an observer in the front cockpit and a pilot in the rear one, quickly became outmoded, and the B.E.2c lost more and more air battles to newer German two seaters. Its shortage of engine power restricted the scope for improvement, andthat is why the B.E.2c remained in the front line only for a short while. However, when the Sopwith 1˝ Strutter, De Havilland DH4 and Bristol Fighter appeared, its roles were limited to the interception of huge slow Zeppelins, and training. It should also be noted, that B.E.2c pilots from emergency flights destroyed at least five giant German Zeppelins. However they were already obsolete in 1917 even for the role of interceptor, and they gradually yielded their places to newer types. The only role left for the B.E.2c was in training, and at the end of WWI only a few machines of the type remained from more than 2,600 produced overall. By the beginning of the 1920s all of them had disappeared for good, and the only B.E.2c remaining is in the Imperial War Museum in Great Britain. This exhibit, an extraordinarily elegant aircraft, is a rare living representative of the first few years of the war in the air and a true predecessor to the modern day Tornado multi purpose two seat aircraft.