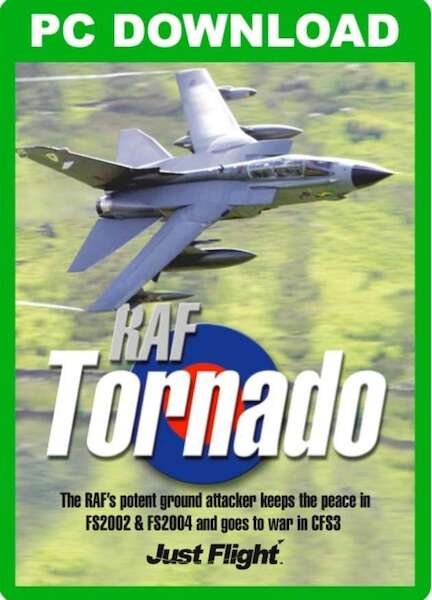 Virtual aviation enthusiasts can now join the modern-day boys in blue, open the taps and move the mud at Mach 2.2! The real Tornado was developed by perfectionists and this unique simulation is no different; it's officially licensed by the Royal Air Force and depicts aircraft from No. II(AC) Sqn, IX(B) Sqn, XIII Sqn, 14 SQn and 617 Sqn.

The Panavia Tornado, a multi-role combat aircraft like no other, was the product of a unique European collaboration. Similarly, its virtual counterpart is a joint venture between celebrated developers Lago, Just Flight and the Royal Air Force. The result is a brilliantly detailed aircraft for FSX/FS2004/FS2002 and, as a bonus, there's a simplified version for Combat Flight Simulator 3.

(Please note: The scenery and refuelling feature are not included for Flight Simulator X and CFS3.)

In Combat Flight Simulator 3 the Tornado becomes a fearsome war machine clothed in three authentic liveries. Custom damage model and activated CFS3 weapons means you can take on the enemy and hit him where it hurts!

In CFS3 the aircraft has a full weapons and damage model and is fully capable of using any weapon that is supported in CFS3 (i.e. no guided weapons). Can dogfight other owners of the Tornado. In-flight refuelling is not available in CFS3. No airfield sceneries are included in the CFS3 version.