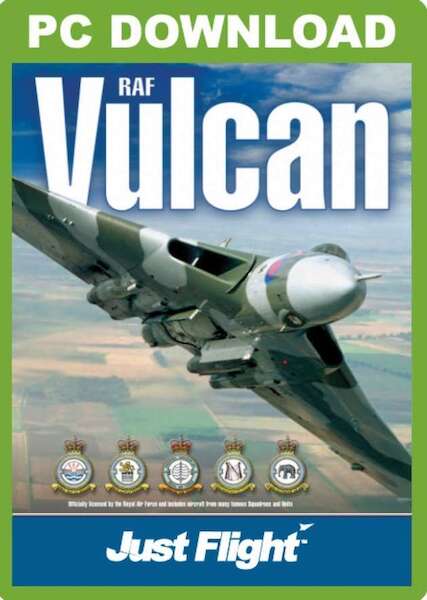 Product description
RAF Vulcan has now been updated for Flight Simulator X. This new download version of RAF Vulcan for FSX/FS2004 is also compatible (with some minor limitations outlined below) with the Flight Simulator SP2 service pack and Acceleration expansion.

The Avro Vulcan’s beautiful lines and distinctive shape make it an icon of cold-war aviation. The Vulcan first flew in 1952, entered RAF service in 1957 and the final Vulcan flight was back in 1993. Thankfully, the last of these milestones has changed - Vulcan XH558 is airborne again thanks to a Heritage Lottery Fund grant and the tireless work of its dedicated fans.

Now updated for FSX compatibility, RAF Vulcan includes a faithful model from acclaimed developers PSS of XH558 as it appears currently, an additional eight all-new liveries from some of the aircraft involved in the Falklands conflict of 1982, and some of the preserved aircraft in the UK.

RAF Vulcan contains a total of eighteen examples in different Squadron liveries and with different model variations, including the 2K air-to-air refuelling tanker variant and those carrying the Blue Steel British nuclear cruise missile, the Shrike anti-radar missile as used in the Falklands, and the ‘project cancelled’ Skybolt missiles.

RAF Vulcan is officially licensed by the Royal Air Force.

While we have made every effort to update RAF Vulcan as completely as possible, unfortunately a few features of RAF Vulcan do not function in all the host sims:

The flight dynamics have been engineered and tested by Squadron Leader David Thomas, Vulcan display Pilot.