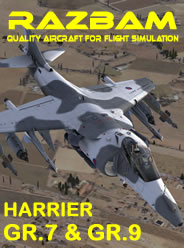 This product was added to our database on Wednesday 3 february 2016.

The McDonnell Douglas (now Boeing) AV-8B Harrier II is a second-generation vertical/short takeoff and landing (V/STOL) ground-attack aircraft. An Anglo-American development of the British Hawker Siddeley Harrier, the Harrier II is the final member of the Harrier family. The AV-8B is primarily used for light attack or multi-role missions, and is typically operated from small aircraft carriers, large amphibious assault ships and simple forward operating bases. The AV-8B is used by the United States Marine Corps (USMC), Armada Espaþola (Spanish Navy) and Marina Militare (Italian Navy). A variant of the AV-8B, the British Aerospace Harrier II was developed for the British military. The TAV-8B is a dedicated two-seat trainer version. The Harrier II and other models of the Harrier family have been called "Jump Jets".

AV-8Bs have participated in numerous conflicts, providing close air support for ground troops and performing armed reconnaissance, proving themselves versatile assets. US Army General Norman Schwarzkopf named the USMC Harrier as one of the seven most important weapons of the Gulf War. The aircraft took part in combat during the Iraq War beginning in 2003. The Harrier II has served in Operation Enduring Freedom in Afghanistan since 2001, and was used in Operation Odyssey Dawn in Libya in 2011. Italian and Spanish Harrier IIs participated in overseas conflicts, in conjunction with NATO coalitions.

The Harrier GR.7/GR.9 was also capable of being operated from the Invincible class aircraft carriers. The Harrier II flew combat missions in Kosovo, Iraq, and Afghanistan. In December 2010, budgetary pressures led to the early retirement of all Harriers from service.

The BAe Harrier GR.7 & GR.9 are the UK versions of the AV-8B Harrier II with upgraded avionics to include night attack capabilities.

very comprehensive representation of cockpit systems which include: