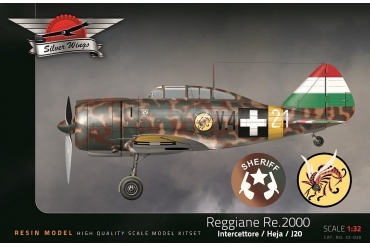 This product was added to our database on Monday 7 January 2019.

The Reggiane Re.2000 fighter was designed by Roberto Longhi and Antonio Alessio in 1938 as a result of Longhi's visit and study in the USA Aircraft manufacture during 1936-37. A meet with Alexander de Seversky during the build of the contemporary P.35 gave Mr. Longhi information and technology for his future fighter project. The Re.2000 was accepted for production by Regia Aeronautica and prototype was ready to fly on 24 May 1939 at Reggio Emilia.

Apart from the engine, new fighter was very similar to the P.35, and during test flights held in Guidonia it gave an excellent performance, and on several occasions, it performed better than other fighters like the Fiat G.50 or Macchi Mc.200.

It served mainly at Palermo-Boccadifalco airport in Sicily, with 377a squadriglia interceptors and some Fiat CR.42 night fighters.