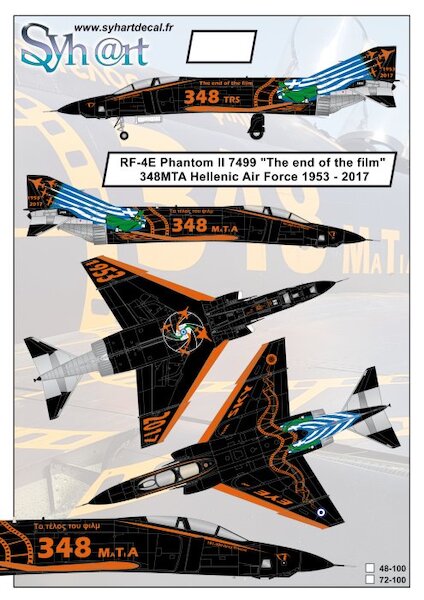 The 5th May 2017, on Larissa airbase was last day of flight for the Greek recce Phantoms, also it was the day of disbandment of the 348MTA (Tactical Reconnaissance Squadron).

The RF-4E Phantom II serial 69-7499 was painted black specially for the event, it received squadron colors, the "spook", a film along the wings and fuselage and the phrase : "The end of the film" as well as the silhouettes of historic aircraft flown by the 348MTA on tail and underside, (the F-84G, RT-33A, RF-84F and RF-4E).

From 2003, the electronic reconnaissance was integrated to 348MTA and a few RF-4E Phantom were equiped with ASTAC pod.

Beysides the military reconnaissance and intelligence missions, the Greek RF-4E flew for public utilities like the photographic missions over the wild fires.