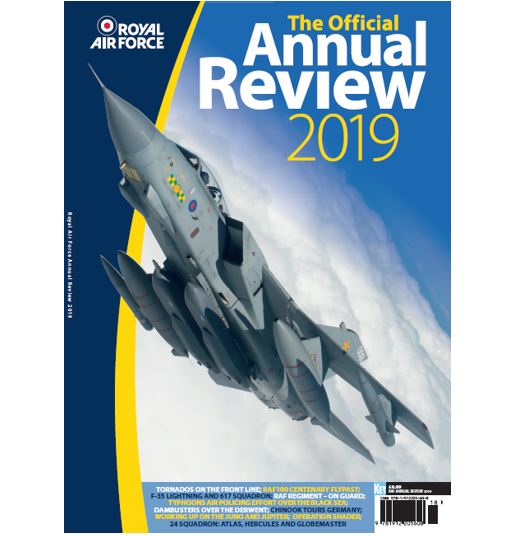 This product was added to our database on Thursday 20 December 2018.

The Official RAF Annual Review 2019 has been produced by Key Publishing with exclusive access to the Royal Air Force, and featuring articles written with and by RAF personnel. This 132-page special magazine providing behind the scenes insight into the aircraft, equipment, people and operations of one of the world's premier air forces, in its centenary year.

Featuring:A Momentous EventThe largest and most spectacular part of the RAF100 celebrations – a mass flypast over Buckingham Palace – took place in July. Review looks back on a day the RAF went to town, with exclusive behind-the-scenes access.

Watching the World… 51 Squadron and Rivet JointGathering signals intelligence is 51 Squadron's mission, the unit working in close co-operation with its US Rivet Joint colleagues.  Based at RAF Waddington, it's one of the UK's key ISTAR operators, as Wing Commander Phil McConnell, Officer Commanding 51 Sqn, reveals.

Tornado - Fighting to the EndWe take a detailed look at the mighty Tornado ground attack aircraft's last operational duties as it approaches the end of its front line service.

Welcome to the F-35 Lightning In 2018 RAF Marham became home to F-35B Lightnings operated by 617 (Dambusters) Squadron. Review was given exclusive access to the special unit, and incredible aircraft.