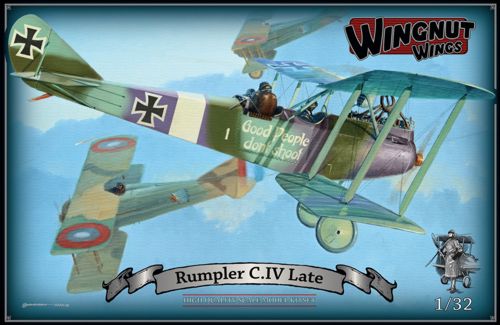 High quality Cartograf decals with markings for 5 aircraft and fitted 5 colour lozenge - 259 high quality injection moulded plastic parts - 12 photo-etch metal detail parts - Highly detailed 18 part 260hp Daimler-Mercedes D.IVa engine - Optional gun rings, wireless, flares, radiators, cameras, propellers, teddy bear and diorama accessories - Fine in scale rib tape detail - Full rigging diagrams
The 260hp (Rumpler Flugzeugwerke Type 6A7) Rumpler C.IV appeared in the war torn skies of Europe during February 1917 and immediately proved itself to be very capable in its intended roles of reconnaissance, artillery spotting and light bomber. Rumpler's C.IV was proceeded by their successful 1915 two-seat 150/160hp C.1 (Type 5A2), which at the time was faster than the legendary single seat Fokker E.III, and the 1916 200hp C.III (Type 6A5). Whether fitted with a camera for reconnaissance, radio for artillery spotting or a load of bombs the C.IV impressed with its great speed, long range and high ceiling which, for a time, allowed it to operate deep in enemy territory without risk of interception. Of course all of this great performance came at a cost and the lightweight fuselage suffered structural fractures under the harsh operating conditions of a front line unit, resulting in the rear fuselage being reinforced with heavier 'struts' and ply panels. Concern was also raised about the heavy aileron controls so the initial stick control column was replaced by a wheel type relatively early in production. Another improvement was removing the sleek propeller spinner in favour of a blunt rounded nose which, contrary to appearances, was more aerodynamically sound and improved performance by 10-15kph. It would appear that many of these improvements were retrofitted to older machines as the opportunity arose.

Records are incomplete and sometimes contradictory so a level of confusion reigns as to the correct designations for the various Rumpler C.IV sub-types. Most Rumpler C.IVs were powered by a 260hp Daimler-Mercedes D.IVa engine and fitted with an internal bomb rack, radio and/or (eventually) various cameras. Airframes fitted with specific equipment or different engines were initially all called 'Rumpler C.IV' although eventually they would be allocated different designations along these lines; Fitted with a 270hp Maybach Mb.IVa it could be designated simply 'Rumpler C.IV' or 'Rubild Mb' or 'Rumpler C.VII'. With a 300hp Basse & Selve BuS.IVa engine it became the 'Rumpler C.IV (BuS)'. A 260hp D.IVa powered version with 4 ailerons license built by Pfalz was initially called the 'Pfalz C.1' but was later designated the 'Rumpler C.IV (Pfal)'. Aircraft built under license at Bayerische Rumpler Werke were designated 'Rumpler C.IV (Bayru)' and 'Rumpler C.IV (Bayru) BuS' depending on the engine. A trainer version powered by a 180hp Argus As.III engine was the 'Rumpler C.VIII'. Contemporary references to a 'C.V' appear to either mistakenly also refer to the 260hp D.IVa powered Rumpler C.IV or a 270hp Maybach Mb.IVa with internal bomb rack. The C.VII became the C.IX when fitted with additional fuel pannier style tanks for increased range. Interestingly no photo showing a Rumpler marked 'C.V', 'C.VII' or 'C.IX' is known to us. Any history here is of necessity very brief so for a better understanding of this important aircraft we encourage you to seek out the  Windsock Datafile 149, Rumpler C.IV At War, Ray Rimell 2011.