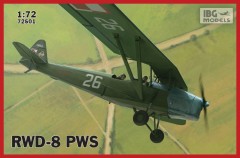 This product was added to our database on Tuesday 1 September 2015.

RWD-8 was a Polish plane designed and produced in the early thirties. Its main role was to be a basic trainer aircraft. It was produced by two different factories simultaneously: PWS and DWL - both versions had some minor differences. PWS factory produced aircraft for both military and civilian use, while DWL focused exclusively on civilian. In total over 550 RWD-8 planes were produced, making it the most numerous Polish plane of its time. RWD-8 was used for liaison and reconnaissance missions during the Defense War of September 1939. Small number of planes were sold to Palestine, Spain, Morocco and Brazil. Moreover, Estonia bought a license to produce RWD-8s. Some of the planes withdrawn from Poland after September 1939 were used by Romanian and Hungarian air forces.