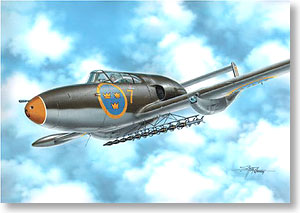 This product was added to our database on Wednesday 9 May 2012.

Since Sweden was neutral during World War II they faced serious troubles obtaining suitable aircraft for their air force. The efforts for self-sufficiency led, among others to development of SAAB J-21A powered by DB605 engine in twin fuselage boom pusher configuration. When the info about first jet engines was available SAAB decide to modify the airframe for jet engine. Even though new J-21R had less common parts with J-21A than already presumed it led to the first jet engine powered fighter aircraft produced in neutral country. The prototype took off in March 1947. Since the thirsty jet engine shortened the endurance and optimal performances were achieved in low altitudes the new machines were used as ground attackers. J-21R served with Swedish AF till the end of 1954. An injected kit of this aircraft was never produced yet. Special Hobby kit contains two sprues with plastic grey parts, opened injected canopy, resin and photo-etched parts. Decals included offer three markings of Swedish AF's machines specified by numbers on the nose and letters on the fin