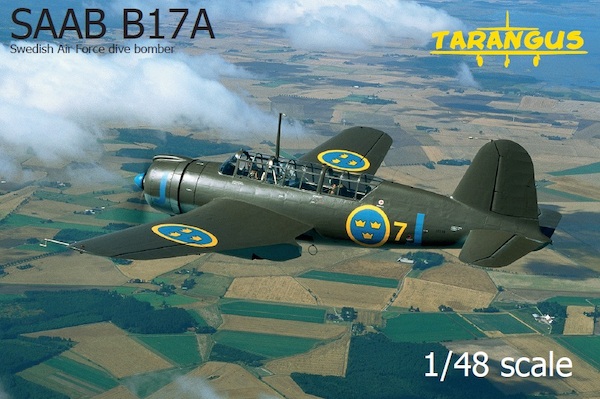 This product was added to our database on Friday 5 October 2018.

The first type that Saab designed and built was initially an ASJA (Saab's predecessor) project called the L-10 but when ASJA was merged with Saab, the airplane was named Saab 17.
As the European continent was thrown into war, the lack of engines forced three different versions of the Saab 17 to be developed; the 17A with Pratt & Whitney Twin Wasp, the 17B with Bristol Mercury XXIV and the 17C with Piaggio P. XIbis R.C.40D. The first prototype flew on May 18 1940 and two years later deliveries commenced.
In the Swedish Air Force it served with the following wings, both as a dive bomber but also as a reconnaissance plane. There was also a version with floats. As the jet age was approaching, the plane was phased out already in 1948. However, it continued to serve as a target tug with several private contractors, among them Svensk Flygtjänst, for another couple of decades.

The Saab 17 was also used by the Ethiopia, Finland and Austria.

Today, there is only one flying Saab 17, which is operated by the Swedish air force historic flight. It was restored to flying condition by former Saab employees to celebrate Saab's 60 th birthday in 1997.
The kit is made with short run technology and of course has the high level of accuracy and details which Tarangus is known for.