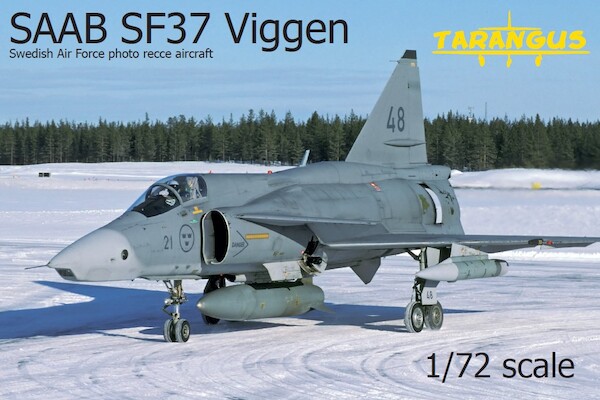 This product was added to our database on Tuesday 23 july 2019.

For the first time in decades, a new tooled kit of the legendary Saab JA 37 Viggen has been released The Viggen is a true classic which has graced the European skies since the 1970s. Although no export customer was found, the Viggen was respected among air force staff and the aviation community during its entire career with the Swedish Air Force.

The Viggen was a true multi-role aircraft, albeit in different versions of the basic airplane. The attack version, the AJ 37, came first, followed by reconnaissance versions (SH 37 and SF 37 for maritime and photo reconnaissance respectively), a trainer version (Sk 37) and a fighter version (JA 37).

The JA 37 Viggen became half a generation younger than its siblings. With an uprated engine, new electronics and a very powerful radar, it protected the skies over neutral Sweden for more than 20 years until replaced by the Saab Gripen The hardest version of the Viggen to replace was definetely the photo reconnaissance version, which for decades was one of the best reconnaissance platforms in the world. Some say it's also the best looking Viggen version. Finally, it's available in a very limited edition from Tarangus!