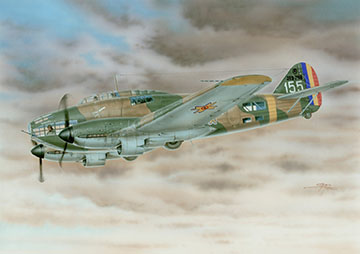 In 1937, the ARR (Aeronautica Regala Romania) bought to the italian society Savoia Marchetti 24 twin-engined SM 79 fitted with two IAR 14K radial engine (licence built Gnome Rhone 14K). These planes (SM 79 B) were under powered. So the ARR ordered 8 additional SM 79, powered by two in-line Junkers Jumo 211D giving 1200 HP. This version, on which the fuselage was deeper than on the initial B version, was known as SM 79 JIS B (JIS for Jumo Italia Savoia) and satisfied the ARR. In 1938, the Rumanian I.A.R. society began to built under licence 36 additional planes, which were coded SM 79 JRS B (JRS for Jumo Romanesc Savoia). Externally, on the JRS version, the bow was shortened, to improve the view for the machine-gunner (but this modification might have been applied afterwards on some JIS)

During WWII, the ARR used the SM 79s against Soviet Union (Odessa, Stalingrad, Don, Moldova), then, after september 1944, against Germany and her allies.