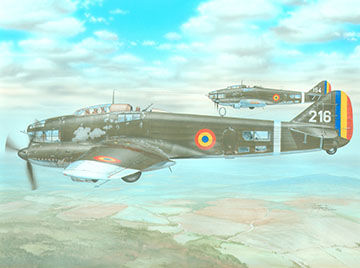 Savoia-Marchetti SM.79JRS B1 (Rumanian WWII (with two Junkers Jumo 211 D inline engines and glass nose instead of the 3rd engine)
History:
The Savoia Marchetti SM 79 was one of the most outstanding successes of the italian aircraft manufacturing industry in the thirties and forties. Winner of the Istres-Damascus-Paris air race on August 1937, this smart three-engined plane was used by the Regia Aeronautica as a bomber and torpedo bomber.

The last SM 79 twin-engined version was assembled by I.A.R, starting on beginning of 1943. She was coded JRS 79 B1, fitted with two in-line Junkers Jumo 211 F delivering 1380 HP and she retained the JRS B shortened nose. The 36 planes produced were code with tactical numbers ranging from 201 to 236. They were used used by ARR against Soviet Union and, after the 23th of August 1944 coup, against Germany and her allies. The Michael 's cross was then replaced by the traditional blue-yellow-red cockade