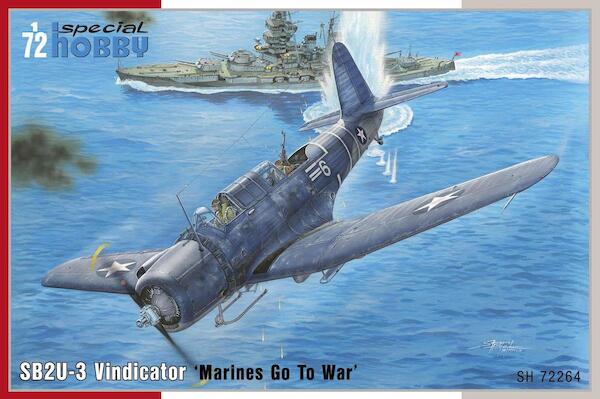 This product was added to our database on Thursday 8 August 2013.

In the 1930s it became obvious for the US. Navy that the biplane era was over. Cantilever low-wing monoplane with retractable undercarriages, phenomenon of the time, offered much better performance in comparison with the classical biplanes. This fact convinced the decision-makers to call for a competition for a new SB category machine (SB for Scout-Bomber) and dive bombing abilities were required. XSB2U prototype, named Vindicator and made by Vought factory was the winner and was accepted into production for the US Navy and Marines, and manufactured in SB2U-1, -2 and -3 variants. Longer range than the earlier models had was required by the Navy and Marines and so the -3 version got enlarged fuel tanks. In order to maintain the center of gravity, larger tailplanes were used and also the outer foldable wing sections had more dihedral. The US Navy Vindicators were never put into real fighting unlike the Marine Corps machines. Marines unit VMSB-231, in March 1942 redesigned to VMSB-241 and named "Sons of Satan" and stationed at Midway Atoll, got its SB2U-3 Vindicators and used them in the probably most important battle in the Pacific. After the battle, the VMSB-241 Vindicators were used until the autumn 1942 when were withdrawn from the first line. Model of this version consists of two plastic part sprues, injected clear canopy, detailed resin machine-gun and decals. While the fuselage halves and wing parts are made from standard short-run moulds (and differ from earlier versions in SH72257 and SH72272 kits), the tiny parts were designed using 3D technology and injected into machine-milled metal moulds. This fact ensures a much higher quality and pushes the model to a higher level. In the metal moulds you ll find not only the cockpit and undercarriage parts, but also various bombs, armament and an underbelly fuel tank. There are four machines in the decals , the first one is the famous Battle of Midway machine inBlue-Gray on its upper surfaces and Gray below and the rear also the aluminium-doped first prototype with yellow wings and two grey overall machines. One of them was destroyed during Japanese raid on Peral Harbor, the other one was used for training in the USA