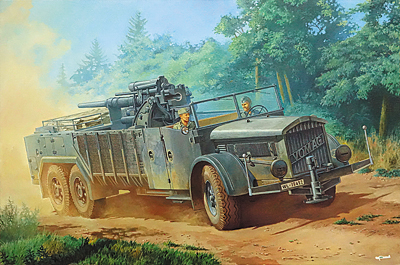 In 1940 the German automobile builder Vomag, which made trucks and staff buses for the needs of the Wehrmacht, received an order from the military for a special heavy mobile anti-aircraft vehicle, able to transport the 88mm Flak 36 gun on its own chassis.
This order came stamped with high-level importance because the future vehicle had a very particular task - the escort of the Fuhrer as part of a special division ("Führerbegleit - Flakabteilung") to the front, where they were to ensure the constant safety of the head of state, manned by personnel dedicated to all measures of anti-aircraft defense.
For this requirement a triple axle chassis was chosen, which was capable of transporting 9 tonne loads. To perform technical tasks, the best suited was a bus chassis, because it had a frame design enabling the installation of a gun at a relatively low height above the ground, and keeping vertical alignment within acceptable limits. The vehicle had 10mm tolerances in its vital units. In order to protect the crew in bad weather conditions, a tarpaulin awning was mounted in the rear part of the body. Behind were located two coils of wire cable for radio communication between units. The ammunition for the gun was stored in two compartments at the very back of the car body.
The first cars were constructed in the same year and soon, in the spring of 1941, were delivered to the specially created 1st battalion of the 42nd anti-aircraft regiment, which was based in Dresden. The division received 20 vehicles of this type - not only gun transporters, but also targeting cars with special sights and fire control equipment. In general, each unit of the battalion had three gun carriers, two range-finder cars, and also escort vehicles of other types.
Soon after being established, the battalion was transferred to Poland, but once the Luftwaffe had quickly overwhelmed the country's limited air force, the Vomag had little work to do in this sector.
After the Blitzkrieg of 1940 and the fall of France, the pressing need to escort the Fuhrer with these vehicles generally disappeared, as there was now no serious threat from the air on the continent, and so they were transferred to the training base at Doberitz. However, the division continued to report directly to the Luftwaffe command in Berlin. It was planned that due to its mobility it would constantly move from one allied air raid zone to another, but this tactic proved to be unjustified as the British bombers continually changed their approach as they attacked Germany.
From 1942 to 1944 the battalion was constantly moved from one part of the front to another, and in 1944 it was sent to Romania, where at that time the government of the country announced a truce with the USSR. In heavy fighting with Soviet troops it was almost completely destroyed. Some vehicles moved to a new base in Hungary, but at the beginning of 1945 during battles with the Soviet armies the remainder of the division was completely destroyed. None of the 88mm guns on the Vomag chassis survived the war.