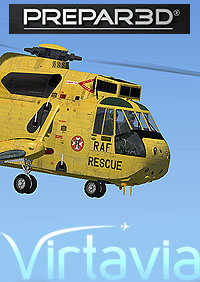 The Sikorsky SH-3 Sea King (company designation S-61) is a twin-engine anti-submarine warfare (ASW) helicopter. It served with the United States Navy and other forces, and continues to serve in many countries around the world. The Sea King has been built under license in Italy and Japan, and in the United Kingdom as the Westland Sea King.

10 distinct models and TWENTY highly detailed texture sets provide wide coverage of many of this famous helicopter's variants and users. The virtual cockpit has many nice details, such as a fully-functioning hover gauge, a drift indicator, mousable radios and a completely modelled rear cabin area. A TSS sounds package provides a highly realistic audio dynamic, both inside and out. Carefully-tuned flight dynamics make the Sea King a delight to fly, with nimble agility at low speed and safe stability at cruise. The systems are kept to a minumum, just start and fly, so flightsim novices and those new to rotorcraft will have no trouble in getting into the air in the Virtavia SH-3 Sea King.