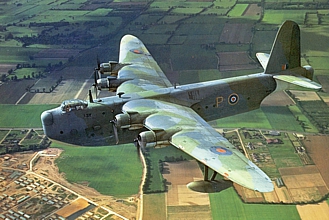 This product was added to our database on Wednesday 11 March 2015.

In 1941, the Bristish Air Ministry issued an requirement for a heavy defensive armament, long range flying boat that intended to replace the Short Sunderland. Saunders-Roe propsed S.41 to the Air Ministry, and was asked to combine the project with Short’s proposal. The detailed design was performed by Saro, their experience with the "Shrimp" contributing to the hull shape, as well as building the wing. Shorts built the hull and tail and did the final assembly. The first prototype and what was to be the only Shetland first flew in December 1944. Flight testing indicated satisfactory water handling but revealed problems with the harmonization of controls and marginal longitudinal stability. With the end of the war, the second prototype was completed as a civil transport and designated Shetland II. the Shetland Mk. II's first flight took place in September 1947. After trials, it was delivered to Short's factory at Belfast, but no orders were forthcoming and it performed only limited flight trials before being scrapped in 1951.