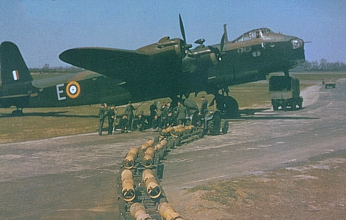 This product was added to our database on Monday 8 April 2013.

In 1936, when the British Air Ministry issued Specification B.12/36 which called for a conventional design which could operate from existing airfields but have a range of not less than 3,000 miles and carry a bomb load in excess of 8,000 lbs. In all 19 aircraft manufacturers were advised of the Specification and of five tendered designs. Both Shorts and Supermarine were asked to produce two prototypes each of their designs but by chance the offer from Shorts was the only one to reach production. The first Stirling prototype made its first flight in 1939 and was badly damaged on landing failure. It had to be written off with the delay in test flying whilst modifications were made. The first production aircraft had left the factory but even this had an engine failure on take-off. Production had continued at the height of Battle of Britain. By the end of 1941 some 190 Stirlings had been built and delivered. In late-1942, the RAF started using the larger 4000-lbs bombs. The Stirling became less useful. When the Handley-Page Halifax and Avro Lancaster became available from 1943, the Stirling was decided to withdraw to second tasks