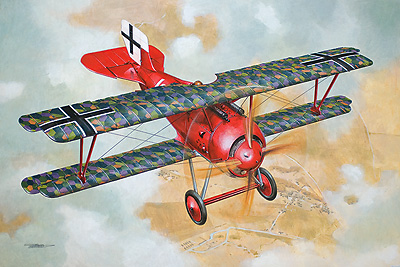 This product was added to our database on Sunday 29 November 2009.

One of Germany's biggest companies, Siemens Schuckert Werke was already world renowned at the beginning of the Twentieth Century, first of all in its application of innovative developments in manufacturing industry in the fields of electricity and telegraphic communication. In 1907 the company expanded into the newly popular arena of aeronautics and built an aerostat (military balloon) and two years later produced a monoplane of its own design. However, both developments passed by almost unnoticed.
This situation changed with the onset of WWI - before long, Siemens Schuckert Werke was able to construct the SSW R.I bomber. Although it was only built in small numbers, it played a full part in military operations. In 1916, after a technical request of the Air Inspectorate (Idflieg), the firm built a replica of the most successful French biplane of that time, the Nieuport 11 Bébé. This fighter was named the SSW D.I and was manufactured in a small series. The experience gained allowed Siemens to concentrate on the development of a fighter of its own design, which, thanks to the designers' preliminary work, would turn out to be very different from all other German fighters of that epoch.
The principal factor which put limits on any possibility of improving the performance of German fighters during the war was the lack of a powerful engine. The Siemens company had already conducted experiments with bi-rotary engines for some period of time - it was a radical design, in which unlike an ordinary rotary engine the cylinders revolved in the opposite direction to the crankshaft. During tests in an experimental SSW D.I it showed a substantial improvement in all aspects of operation, and Siemens Schuckert Werke decided to build a completely new, more powerful 11-cylinder engine, the Sh.III, fitted to a new airplane.
In October 1917 Siemens demonstrated four new experimental machines to the military, each with different overall dimensions but the same basic type of construction: a classical biplane with a wooden fuselage, with a characteristic circular cross section throughout; and an identical new Sh.III. engine. Among these four highly impressive airplanes was D.7552/17, which soon acquired its official type name of SSW D.III and on the occasion of the First Fighter Competition in January 1918 was ordered in a quantity of 20 machines for the immediate needs of the Front with the purpose of evaluating its potential in combat conditions.
It should be noted that during the Competition the SSW D.III achieved an unprecedented figure in climbing to altitude it attained a ceiling of 6 thousand meters in 21 minutes, when other German fighters needed more than twice as long to do the same. Such an airplane was obviously more than desirable for Germany which increasingly felt the pressure of the air armadas of the Entente in the sky. After successful tests in operational conditions Idflieg placed two additional orders with Siemens Schuckert Werke; at first for 30 SSW D.IIIs, and then for 50 more machines.
In the period from March to May 1918 at least 41 aircraft were delivered to the Front, mainly to the elite squadrons of Jagdgeschwader I and Jagdgeschwader II. A celebrated ace, and commander of JG II, Rudolf Berthold acclaimed the potential of the SSW D.III as "unsurpassed", especially in the context of its capability as an airplane interceptor. The SSW D.III went extremely well after enemy intruders at extraordinary altitudes of 5000-6000 meters, and Englishmen and Frenchmen often became easy prey for the SSW D.III.
However, the type was very soon plagued by engine related troubles. After a mere 7-8 hours of normal running the Sh.III displayed the signs of cylinder head disintegration, resulting in complete destruction of the engine. Evidently the engine was very demanding as to the quality of its oil and intolerant of synthetic substitutes, during a time when Germany had great difficulty sourcing the castor oil required for aviation use. At the end of May 1918 all SSW D.IIIs were returned from the Front to the factory for repair. In perfecting the engine a major role was played by the firm Rhenania Motorenfabrik AG, and in due course its durability was tested to at least 40 hours of operation without breakdown.
Modified SSW D.IIIs with the improved engine began to return to the Front in July of that year. They were quite different from their predecessor in the characteristic rectangular form of their tail fin; engine cowling much cut away for the sake of improving engine cooling; balanced ailerons; and other less important differences. Taking into consideration that an overwhelming number of fighter squadrons at that time were already re-equipped with the predominant Fokker D.VII, the subsequent operational career of the SSW D.III was confined mainly to the squadrons of the home defense Kestas.
All things considered, the SSW D.III was one of the most significant airplanes of its time. It may not have gained the same great fame as the Fokker D.VII, which was even mentioned in the articles of the Versailles Agreement, but the SSW D.III was marked down by the Inspection Committees of the victor countries as an "airplane of potential threat" to their own forces, and almost all surviving machines, together with the small quantity of SSW D.IVs which had continued to be built after the war, were completely destroyed in 1919