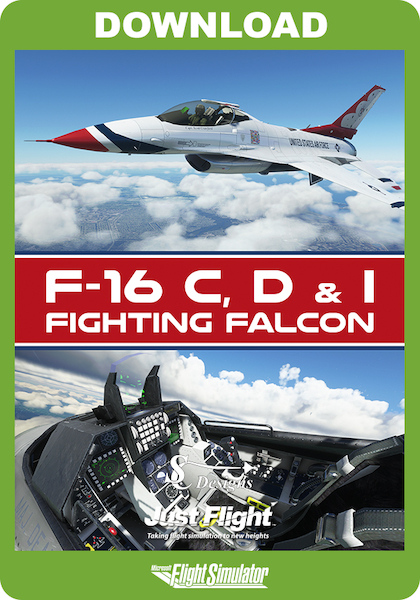 This product was added to our database on Tuesday 18 January 2022.

All models have been coded with Microsoft Flight Simulator native 'Model Behaviors' animations and built to MSFS operational specifications All custom cockpit instruments and screens are coded in HTML for native, high-performance display in MSFS The Falcons make use of the new simulator's features such as effects and sounds, fully reflective glass, native aerodynamic sound structures, the new 'Modern' aerodynamics system with the ability to provoke 'departure spins', and customised visibility controls for wheel chocks, covers, and boarding ladder. The Falcons also contain custom-built and animated effects such as afterburners. Other features include authentic cockpit night lighting with brightness controls, and custom-coded manoeuvring flaps and slats Numerous external animations including canopy, crew ladder, tail hook and control surfaces The F-16 Falcons are fully compliant with Virtual Reality headsets Full custom WWise sound set

Manual A full operations manual is included in the software.


Note: Ensure you set the Flight Model option to 'MODERN' in the MSFS Options (OPTIONS > GENERAL > FLIGHT MODEL).
This add-on is NOT compatible with the Xbox edition of Microsoft Flight Simulator.
This add-on features weapons which are NOT included in the version which will be available from the MSFS Marketplace.