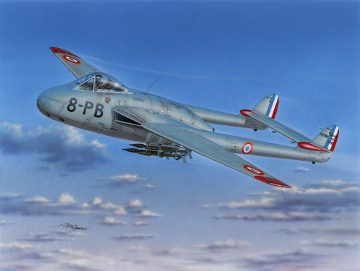 This product was added to our database on Wednesday 16 January 2019.

The French aircraft industry, severely affected by WW2, took time to introduce indigenous designs. It initially maintained production of types on existing assembly lines like Nord's Criquet (a modified Fieseler Storch), or launched production of licensed aircraft. Amongst the latter was the DH 100 Vampire, with 187 units built by SNCASE. The Vampire was a little under powered, so SNCASE resumed studies started by De Havilland to install the Rolls-Royce Nene engine in the Vampire.FRROM - FR0041 SNCASE Mistral

The Mistral (aka Vampire FB.53) exploited the more powerful Nene engine, also built under license in France. It delivered 61% more thrust than the DH Goblin 2 used to power the majority of single-seat Vampires, yet was only slightly bigger. This imposed important modifications of the aircraft: The air inlets were redesigned, and exploited Armstrong Whitworth's work on developing wing root air-intakes for their Nene-powered Sea Hawk. This meant the Mistral did not have to resort to the use of additional external air-intakes protruding as paired scoops from the fuselage to meet the Nene's airflow needs (unlike British and Australian Nene-powered Vampires). The wings were modified to carry drop-tanks, and the fuselage belly was slightly inflated to facilitate engine air flow.

Probably the best performing and most refined single seat Vampire variant, the Mistral was not much faster despite its extra power due to the airframe's critical Mach limitations, which could easily be exceeded at higher altitudes. Despite this, on December 21, 1952, Jacqueline Auriol broke the female world speed record on a Mistral, which was later assigned to the 7th EC.