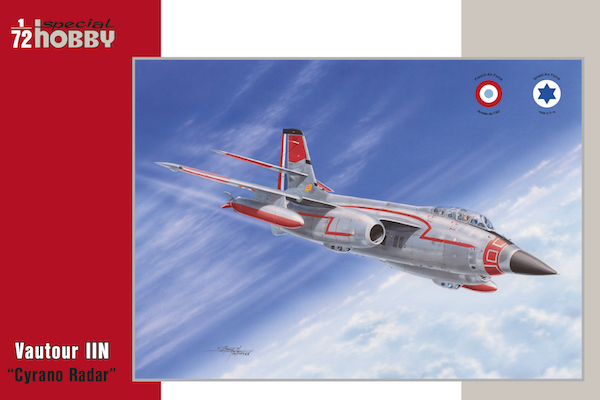 This product was added to our database on Tuesday 7 June 2016.

The all-weather Vautour IIN jet fighters were operated in France not only by AF units, they were used also as a kind of test-beds long time after being withdrawn from military service. Development work for radars to be used in various and more advanced Mirage III, F.1 and even Mirage 2000 fighters were carried out using these Vautour aircraft. In the French Centre d'Essais en Vol (CEV, or Flight Test Centre) several IIN Vautours of various serial numbers were flown, amongst them also the very first IIN Vautour to be produced, this one was handed over to the CEV on Feb 7, 1957 and was equipped with a Cyrano radar connected with Mirage fighters development. This machine was also used for trials with fixed armament, rockets and missiles. It was sold to Israel in 1964 and operated at Ramat David AB by No.110 tayeset (or squadron) since 1967.The plane was fitted with extra long range fuel tanks in its bomb bay and modified to carry a Thomson CSF ECM "Yabelet" Pod and used to blind Egyptian and Syrian SA-2 Radar systems in the opening hours of the Six Day War. On return from one such mission, an u/c trouble occured, the machine ran off runway and was grounded for the rest of the war. In 1968, a K-38 camera pack was installed in the belly and another camera systems in the gun bay, AAM Shafrir I was also carried under the wings and the plane was used in a photo recce role until 1970 when it was put into storage. Now it is on display at the IAF Museum in Hatzerim.

The model comes on four sprues of plastic part components, and comprises also a clear parts sprue, a PE-parts fret and detailed resin parts which offer the modeller with a Cyrano radar nose section, external fuel tanks and several other parts typical for this highly interesting and unusual Vautour test-bed and ECM variant. The decal sheet was printed by Italian Cartograf in exquisite quality and supplies markings for two French planes, No 348 in natural metal finish, the other, No 337 featuring French national colours overall. There are of course also markings for the Israeli "Fantomas" named machine, this one interesting also for carrying two different liveries, the earlier being also the NMF, the other in the standard Israeli three-tone upper camouflage colour scheme.