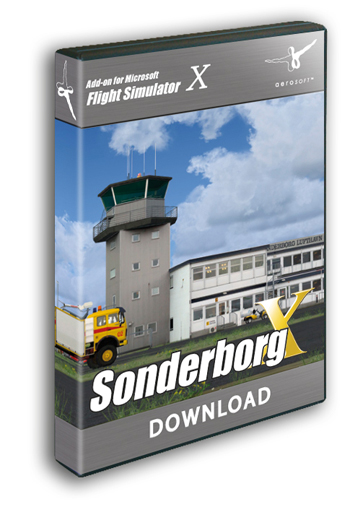 This product was added to our database on Friday 4 March 2016.

Product description:
Sonderborg X is a realistic and highly detailed rendition of Sřnderborg Lufthavn/Sonderborg Airport (EKSB, SGD). The airport is located on the island of Als in Southern Jutland, Denmark, a few kilometers from Sřnderborg City, next to the beautiful Augustenborg Fjord, and not far from the Danish-German border.

The airport has several daily flights to Copenhagen Kastrup Airport (EKCH, CPH). The route is operated by Danish Air Transport, DAT. The flying time between Copenhagen and Sřnderborg is about 40 minutes. Sonderborg Airport (EKSB, SGD) was established in 1966. The airport has a 1,800-meter runway, which can be used by aircraft such as the Boeing 737. The control tower and the runway is well equipped with modern navigation aids and the airport can be operated in virtually any weather.

The scenery features a photoreal terrain, based on a licenced 40 cm/pixel aerial image, which covers the northern part of Kćr Halvř (Kćr Peninsula). The terrain has day/night and seasonal variation. The scenery also features uniquely modeled airport buildings, custom made farm buildings, objects and vehicles. The airport has been recreated in extreme details and the scenery includes many high resolution textures (2048x2048 pixels) based on hundreds of photos taken on-site by Vidan Design. Sonderborg X is designed to be used on a standard FSX Acceleration/SP2 installation under DirectX 9. The scenery is not compatible with "DirectX 10 preview".