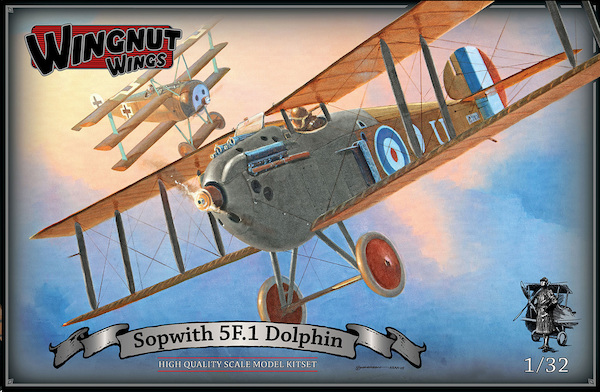 Sopwith 5F.1 Dolphin. The Dolphin was a 4 gun high altitude fighter introduced in late 1917 and was powered by the 200hp Hispano-Suiza V8 geared "Hisso" engine. The Sopwith Dolphin was faster and performed much better at high altitudes compared to its more famous counterpart the Sopwith Camel. The Sopwith Dolphin featured two bay wings with negative stagger, a completely open top wing centre section, deep fuselage and was armed with up to 4 guns. Nearly 1800 Dolphins were built by The Sopwith Aviation Company LTD, Hooper & Company LTD and The Darracq Motor Engineering Company LTD. It wasn't officially declared obsolete by the RAF until September 1921 and a small number continued to see service with Poland in the early 1920s.


The Sopwith 5F.1 Dolphin was designed during the 2nd quarter of 1917 to make use of the promising new 200hp Hispano-Suiza V8 geared "Hisso" engine which was also to power the SPAD XIII and SE.5a. One other overriding consideration was to overcome the staggeringly poor visibility caused by the top wing centre section of the otherwise quite remarkable Sopwith Camel. The initial Dolphin prototype 5F.1/1 rolled out in May 1917 and featured wide twin bay wings with negative stagger, a completely open top wing centre section, unbalanced Camel style rudder & fin and wooden undercarriage Vee struts. The very deep fuselage occupied the full height of the wing gap and featured a tall radiator in front of the engine. It"s first flight was delayed due to problems securing a suitable example of the engine. The 2nd prototype 5F.1/2 appeared in late July and incorporated numerous improvements including a balanced rudder, cutouts in the bottom wings, removing the frontal radiator (which allowed the streamlining of the nose) and replacing it with twin radiators mounted in the top wings. These radiators proved ineffective so were in turn replaced by versions mounted on the sides of the fuselage. The cutouts in the bottom wings were deleted for prototypes 5F.1/3 & 5F.1/4 which appeared during October and introduced a more substantial fin, lowered rear decking and twin upwards firing Lewis guns.

It was pretty much in this form that the initial production Dolphins were delivered in late November 1917, except they had reduced negative wing stagger and steel tube undercarriage Vee struts. The twin Lewis guns proved heavy and cumbersome so the port gun was quickly deleted, and frequently the starboard gun was removed in service. Early production Sopwith 5F.1 Dolphins featured a Birch plywood tail skid, 4" radiators and vertical neck padding on the centre section. There were several attempts to provide "roll over" protection for the pilot"s exposed head but none were adopted, although some late production aircraft featured a quick release for the port cockpit rigging to allow the pilot to escape from an upturned aircraft. Other improvements incorporated on late production aircraft included a steel tube tail skid, 8" radiators and a centre section with improved Aldis sight mounts and more streamlined padding.

Supply and reliability problems with the 200hp Hispano-Suiza V8 geared "Hisso" engine would continue to plague the Dolphin for most of it"s service (as they did for the SE.5a "Hisso") but eventually it became well regarded as a high altitude fighter. The Sopwith 5F.1 Dolphin II was developed for the French in mid 1918 to utilize a 300hp direct drive Hispano-Suiza engine and the USAS ordered over 2000 to be built by SACA in France but the Armistice was signed before any were delivered and the order was canceled. The Sopwith 5F.1 Dolphin III was under development shortly before the Armistice and was to utilize the more reliable direct drive "Viper" version of the 200hp Hispano-Suiza. Only a handful of Dolphin II and III were produced and can be identified by their lower propeller thrust line and fully cowled Vickers guns. Nearly 1800 Dolphins were built by The Sopwith Aviation Company LTD, Hooper & Company LTD and The Darracq Motor Engineering Company LTD. The Sopwith 5F.1 Dolphin was officially declared obsolete by the RAF in September 1921 but a small number continued to see service with Poland