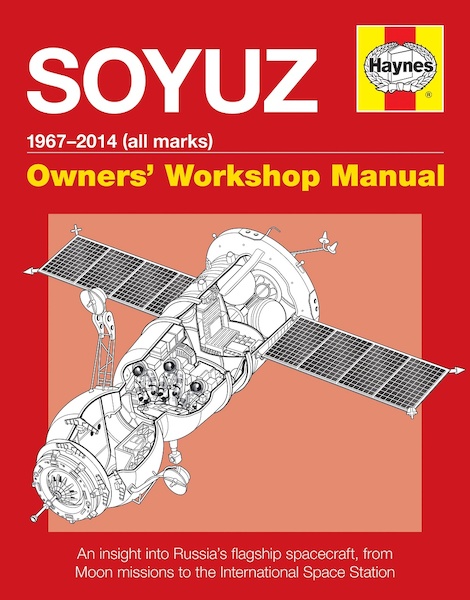 Detailed 'how it works' Haynes Manual treatment.
A fascinating insight into the design, construction and operation of the Soyuz.
Expert author who has worked on the Apollo and Shuttle space programmes.
Fully illustrated.

The Soyus Manual tells the story of Soyuz from its origin as successor to the Vostok-era capsules which carried early cosmonauts into space, to the Zond spacecraft which aimed to send humans to the Moon and back, and to the unmanned Progress cargo-tanker vehicles which serviced space stations with goods and supplies. Soyuz has proven to be the most versatile spacecraft ever built, serving many roles across five decades.

A product of the Cold War and the space race that saw Russia and the United States struggling to put the first men on the Moon, the Soyuz spacecraft was designed in the early 1960s and has been carrying cosmonauts and astronauts into orbit for almost 50 years. In that time it has served to deliver people to several Soviet-era space stations and to the International Space Station (ISS) since 2000, when it carried the Expedition 1 crew to the orbiting facility.

The story of Soyuz embraces the race for the Moon, told here as an integral part of how the spacecraft was adapted for new goals and changing requirements. That ultimate achievement was never realised, but the story of how the programme suffered from political meddling is key to understanding the history of the spacecraft itself. Added to this are detailed descriptions of how Soyuz works and how it is operated, with upgrades and improvements keeping pace with the latest technology.

Detailed 'how it works' Haynes Manual treatment.
A fascinating insight into design, construction and operation of Soyuz.
Expert author who has worked on the Apollo and Shuttle space programmes.
Fully illustrated.

Author: Dr David Baker worked with NASA between 1965 and 1990 and visited Russian space facilities several times during the 1980s. He has written more than 90 books on space science, engineering and technology and on the politics of the space programme, serving seven years as the editor of Jane's Space Directory. In 1987 he was elected a member of the prestigious International Academy of Astronautics and is a Fellow of the British Interplanetary Society. David is the recipient of the 1998 Rolls Royce Award for Aerospace Journalist of the Year and the 2008 Sir Arthur Clarke Award. He has made numerous TV appearances and is regularly interviewed by media stations around the world. David is currently the editor of Spaceflight, the monthly news magazine of the British Interplanetary Society.