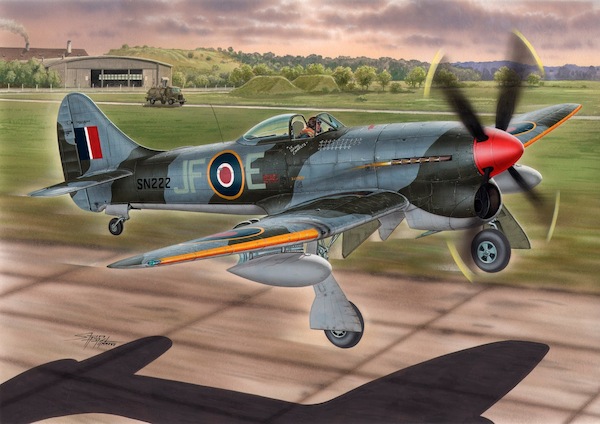 .Hawker Tempest Mk.V "Hi-Tech 2" Includes a partial resin replica of the Tempest power unit, the Napier Sabre engine which had been 3D designed and its master parts produced in a 3D printer to achieve the highest possible quality and accuracy. Besides the resin engine, the kit also comprises detailed resin parts for the cockpit and resin wheels, a set of photo-etched parts (seat belt buckles and other detailed parts both for the interior and exterior of the kit), HGW laser pre-cut seat belts, spray masks for canopy, clear parts and wheels. Another addition not available with earlier Tempest Mk.V releases is an extra sprue offering under-wing rocket projectiles. So, all in all, the kit comes on nine grey styrene sprues and one clear sprue. The surface of all major parts is covered with very finely rendered rivet lines. A very nice feature of the kit is a detailed A4-size full-colour instruction booklet that will guide the modeller all through his build. The underwing weapons are meant for one of the kit's five camouflage schemes. The modeller will be able to choose between the following ones: Le Grand Charles, the machine of the highest-scoring French ace pilot Pierre Clostermann, Tempest EJ750/JBW, a personal mount of WgCdr J.B.Wray, Tempest EJ762/JJ-F of F/L D.C.Fairbanks DFC and Two Bars (12.5 kills), Tempest SN206/5R-B of Belgian pilot F/O G.A.Rens and silver-coloured post-war Tempest SN330/J5-H of S/L R.B.Cole, DFC and Bar which is the machine to be fitted with the underwing rocket projectiles. The decal sheet features also a full set of stencils, including those for the cockpit and the fuel tanks.
The Tempest is arguably one of the best fighter planes of the Second World War. During the conflict, the opposing sides were constantly competing against each other to keep abreast of the latest technological developments, and as a result it led to ever more powerful and effective warplanes. In 1941, the new German Fw 190 fighter began to enter service and in response the British hastily developed the new Spitfire versions along with introduction into service of a new type called the Hawker Typhoon Mk.I. The introduction of the Typhoon and its powerplant into service was not without certain trouble and as restrictions of the Typhoon design soon emerged, Sydney Camm, Hawker's chief designer, began to design a new fighter aircraft, partially based on the Typhoon. As the number of alterations to the original design was quite substantial, the new plane was to carry a new name, the Hawker Tempest and soon proved to be one of the best WW2 fighter planes. And our Hawker Tempest kit brings you the very best quality we have achieved so far in the field of 1/32 scale aircraft model kits.