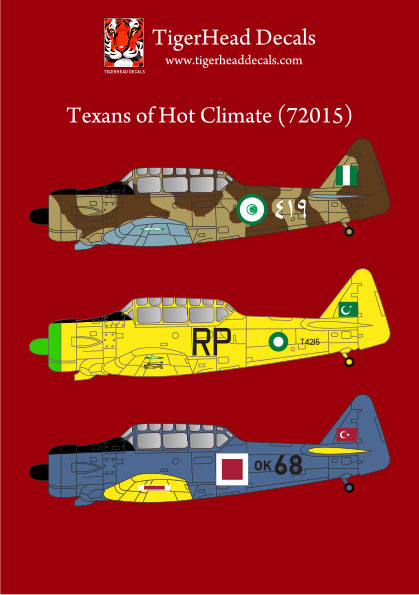 Texans of Hot Climates (Tigerhead Decals 48024)
€ 11.53
EU: incl. tax € 13.95
Reduced shipping charge may be applicable depending on country of destination and contents of shopping cart. Will be shown before checkout.Add to cart

This product was added to our database on Tuesday 31 March 2015.

T-6 "Texan"s are one of the most widely used trainers in the history of aviation. Its design was based on BC-1 basic trainer and the first order was received in 1937. In between 1938-1945 15,495 T-6 were produced. 10,057 of these planes were procured by the USAAC/USAAF and the remainder were deployed at the USN with the "SNJ" code and at 30 ally countries. The RAF was very interested in T-6s and they demanded great numbers. They were also produced under licence in Canada by Noorduyn.Those produced for the RAF and under licence in Canada were named "Harvard"s. Many USAAF pilots flew the T-6s before graduation and the pilots who participated the Battle of Britain and flew the Spitfires and the Hurricanes were trained on the British version "Harvard"s.

It is possible to make 5 full profiles.