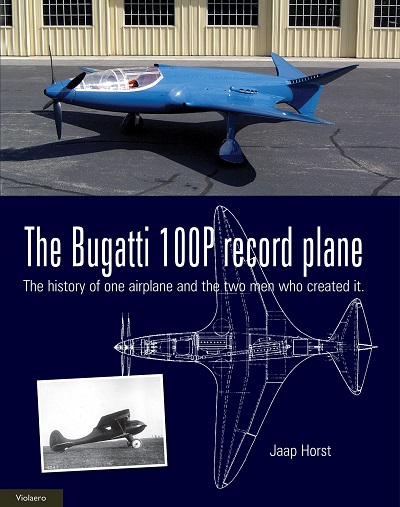 The Bugatti 100P record plane, the history on one aeroplane and the two men creating it Reprint expected December 2021)

This product was added to our database on Friday 17 May 2013.

The development of this extremely advanced airplane with many novel features was started in 1937, for which Ettore Bugatti had hired the Belgian Louis de Monge as chief engineer. The first version of the airplane was planned as a speed-record airplane, a military version was to follow later. Tragically the Bugatti 100P airplane never flew, the Germans invaded Paris where it was being built before it was 100% ready. The airplane surprisingly survived the war, and still exists in the EAA museum in Oshkosh, USA. Both engines exist, and were built into Bugatti race-cars. Currently a flying replica is being constructed in the USA, built in such a way, that it will be aerodynamically the same as the original.

This book for the first time describes the complete history of this wonderfully beautiful streamlined airplane, as well as all of it's novel systems. Also, the histories of both the plane's creators are followed, from the early years of aviation.

Ettore Bugatti is of course well-known through his race- and sportscars from the years in between both worldwars, but he was also interested in many other technical devices. During the first world war airplane-engines were designed and built, the book describes these engines and derivatives in detail, showing also all the airplanes which used these engines, including the world's first fully functional "modern" helicopter.

Louis de Monge built his first airplanes before WWI, during WWI he designed and produced modern propellers, sold under the name Lumičre. After WWI many, often technically advanced, designs were made. The complete history of his many interesting inventions and lack of commercial success is published here for the first time