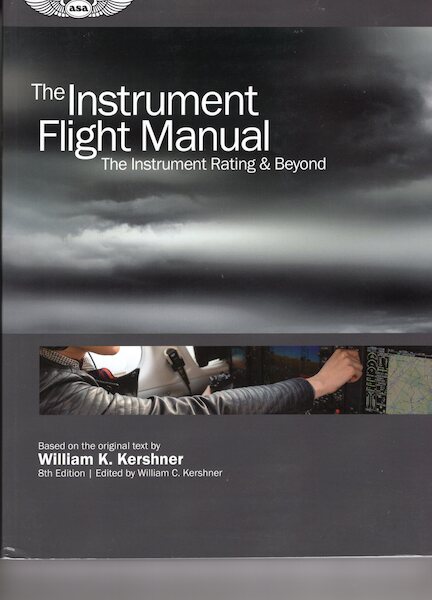 This product was added to our database on Friday 3 April 2020.

Share this product
Also in this series:
9781619548664ASABooks on aviation
Product description

Based on the original text by William K. Kershner, this new seventh edition has been updated throughout to reflect current regulations, operating procedures, and technology.
The Instrument Flight Manual is written for the pilot desiring to add an instrument rating, and for the instrument-rated pilot who needs a refresher. The book's five main sections cover airplane performance and basic instrument flying, navigation and communications, planning the instrument flight, the instrument flight, and a syllabus for the instrument student and the CFII.
As with all of Kershner's books, this manual covers instrument flying in as much detail as possible without over-complicating the subject. Numerous illustrations by the author aid in visualization of the concepts. This book covers everything students need to know to obtain an FAA instrument rating and has consistently
been a favorite of both students and instructors alike. Softcover, 8.25" x 10.75", 388 pages.

Author W.K. Kershner's son, W.C. Kershner is now the editor of the Kershner Manuals Series; he received his training from his father and is a flight instructor and airline captain. Bill Kershner, senior, with over six decades of experience as pilot-in-command in more than 100 types and models of airplanes, was
FAA/General Aviation Flight Instructor of the Year in 1992, and named Elder Statesman of aviation in 1997. He was inducted posthumously into the International Aerobatic Club Hall of Fame in 2007.