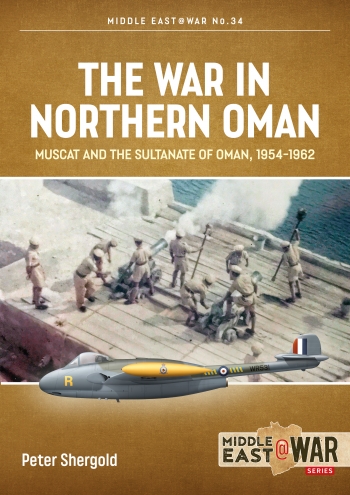 The war fought in northern Oman from 1954 until the mid-1960s is almost completely forgotten. Even amongst contemporary military historians, it is considered less frequently than the subsequent – and widely published – Dhofar War. Though 'small', it was a conflict of crucial importance for the nation on the south-eastern side of the Arab Peninsula.

While usually thought to have been fought – and won – exclusively by special forces, capacity building, and training of native forces, a closer look reveals an entirely different picture. The victory and lasting peace were actually secured by a conventional military campaign dominated by offensive operations, followed by an entirely separate civilian development programme. The role of special forces was overemphasised – not only in regards of their relative number of operations, but also in regards of their impact – while the insurgency was suppressed by punitive means, and the capacity building remained limited during the war. It was only once offensive operations were completed that the development programme contributed to the lasting peace. This peace, in turn, would have been impossible without the conventional military campaign. As such, this 'small' conflict proved of crucial importance for the nation on the south-eastern side of the Arab Peninsula.

The War in Northern Oman provides a detailed account of the political dynamics which led to the eruption of violence, but foremost examines the use of force, the wider conventional military campaign, operations by special forces, military capacity building, and the application of soft power factors for civilian capacity building. Moreover, it emphasises the process of reconciliation and international engagement. Based on extensive research in official documentation, and including numerous personal testimonies, this volume – richly illustrated by photographs provided by veterans – provides exclusive coverage of one of very few wars in which a grassroots insurgency suffered a clear-cut military defeat.