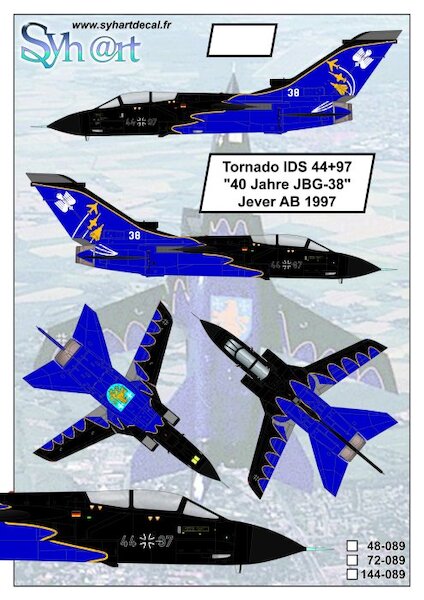 This product was added to our database on Sunday 5 June 2016.

In 1957, in order to train future pilots of the modern Luftwaffe on jet aircrafts. the "Waffenschule der Luftwaffe 10" (WaSLw 10) was created ( Air Force Aviation School), initially based on Nörvenich, and quickly transferred to Oldenburg, the the unit is equipped with canadian built F-86 Sabre Mk. 5 and training are carried out in collaboration with the Royal Canadian Air Force.

- From 1960, when the base and weapons systems trainings are completed between Oldenburg and Jever, the 4th Staffel (4th Squadron) equipped with F-104F (Two-seats), is created on Nörvenich AB to prepare the arrival of the Starfighter in the future JBG-31.
- Since 1964, the base and weapons systems trainings will be performed in the United States, and the Jever AB became the European airspace training flight center.

- In 1983, the Waffenschule der Luftwaffe 10 is retired and taken over by the Jagdbombergeschwader 38 taking part in the training of pilots and WSO Tornado following the Mutinationnal TTTE program (Tri-National Tornado Training Establishment) it is called "Friesland".
This is the first squadron of the Luftwaffe to receive the Tornado IDS, then the Tornado ECR (Electronic warfare and reconnaissance) from 1989 to 1995 before being transfered to JBG-32 on Lechfeld AB.

- On 1997, the unit celebrates 40 years, it's one of the two oldest units of modern Luftwaffe still in service, and it is for this occasion that the Tornado IDS 44+97 receives an overall painted scheme nicknamed "Batman", it wears the colors of the Squadron and the famous hero.
It is the first Tornado to be fully specially painted ... The first in a long line!
It appeared on few airshows in 1997.

- From 1999, when the Staffel 2, and TTTE training center were retired, german pilots and WSO are trained on Holloman AFB in the United States, the Jever AB became-back the European airspace training flight center.
- On 2005, JBG-38 "Friesland" is finally definitively retired and Jever AB will be closed in September 2013.

The Tornado IDS 44+97 was retired in 2008, after several reconnaissance missions in Afghanistan with
AG-51 "Immelmann", it is preserved at the Deutsches Museum Flugwerft Schleissheim near Munich.