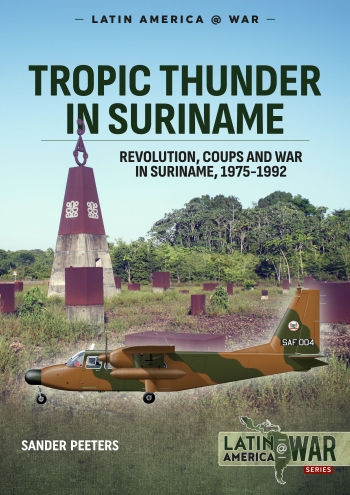 One of the three Guianas, Suriname is the only Dutch speaking country in South America. These fertile lands were colonized by various European nations, with the Dutch capturing many plantations in what is now Suriname, during the Second Anglo-Dutch War. The Treaty of Breda in 1667 established the Dutch permanent rule in 'Dutch Guiana'.

Over the following 300 years, the emerging Suriname saw the creation of many plantations and the influx of settlers, slaves and contract workers from many different parts of the world. This resulted in a society where African slaves, Muslim Indonesians, Hindu Indians, Chinese, European Jews and many others coexisted peacefully.

Suriname was forced into independence in 1975 by the Netherlands as part of its decolonisation program. Bureaucratic mismanagement by the democratic government led to disillusion amongst the Surinamese, resulting in a military coup by a group of disgruntled NCOs in 1980.

Although receiving popular support at first, the newly created national military council soon started to rule with an iron fist, cracking down on the regime's opponents and dealing with several counter-coups. The murder of 15 dissidents in December 1982 was one of the darkest hours in recent Surinamese history and resulted in all Dutch development aid to Suriname being frozen. Due to the resulting lack of income, the military leadership turned to the narcotics trade.

Concurrently, the suppression of the Marrons (descendants of slaves that had fled into the jungle) led to the start of a rebel movement known as the Jungle Commando and was supported by Surinamese dissidents-in-exile. Thus, in 1986 a six-year war started that killed hundreds, destroyed numerous villages and led to thousands of refugees. The war ended with the Peace Accord of Kourou in 1992, after democracy in Suriname was restored.

The volume is illustrated by more than 120 contemporary photographs, maps and authentic colour profiles.