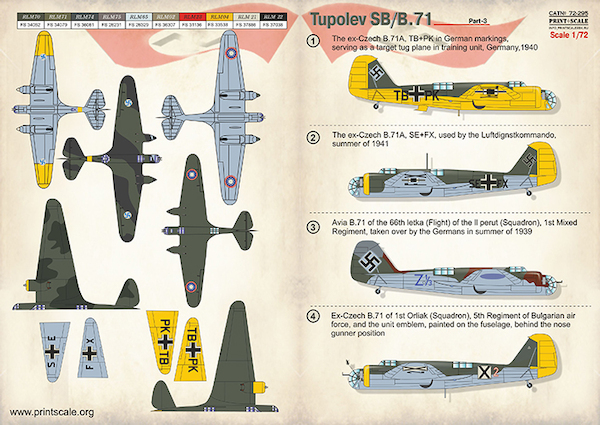 This product was added to our database on Friday 23 february 2018.

4. Ex-Czech B.71 of 1st Orliak (Squadron), 5th Regiment of Bulgarian air force, and the unit emblem, painted on the fuselage, behind the nose gunner position

6. Late series SB-2M-103, fuselage number SB-11 of the 2/LeLv 6, Malmi, summer of 1942. This aircraft was given over to Finland on November 5, 1941, and served in 2/LeLv 6 as of June 22, 1942. On September 24, 1942, just after take off, the elevator jammed and aircraft crashed in the woods. In the subsequent fire depth-charges detonated and all crew members died.
The submarine silhouette on the rubber represents one Soviet boat claimed by the crew.

10. Avia B.71. Unit: Vzdusne zbrane. Serial: V-3 (ex V-3/B.71-19). This airplane was assigned to the Vzdusne zbrane (Slovak Air Arm) in 1939. Additional antennas mounted ob the upper and lower fuselage were for German radio equipment installed on the aircraft. Sergeant Anton Vanko and four colleagues defected to Turkey in this B.71 on 18th April 1943