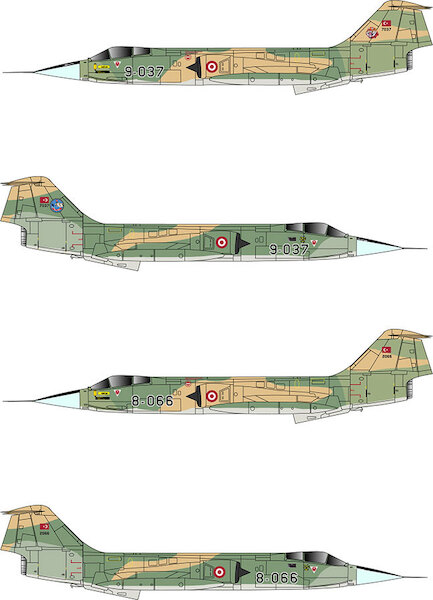 Turkish Air Force F104G Tigermeeters (Tigerhead Decals 48011)
€ 11.53
EU: incl. tax € 13.95
Reduced shipping charge may be applicable depending on country of destination and contents of shopping cart. Will be shown before checkout.Add to cart

Turkey is one of the very first countries to receive the F-104Gs within the MAP program. As a preparation for the new aircraft the 144th Squadron was organised at the 4th AB in Mürted-Ankara. The first 15 aircraft arrived on May 10th,1963 by sea and they were deployed at the newly founded squadron in July. In July 1963 two TF-104gs arrived and they were also assigned to the same squadron. This was followed by Canadair produced 18 F-104Gs and 2 TF-104Gs. The shipment continued in 1965 with 5 more Canadair built F-104Gs. All of these planes were deployed at the 144th Squadron. In 1968 3 pcs F-104G and 1 pc TF-104G were received from USAF.

The TuAF faced with the US embargo after the Cyprus peace-keeping Operation ordered a batch of 18 F-104S from Italy. 6 of the planes were delivered within the same year and the remainder in 1975 on the basis of the planes per month. In 1975 the purchase was risen to 40 planes all which were received within 1976.

Within the elapsing time the TuAF F-104Gs started aging and they were withdrawn from active duty one by one.