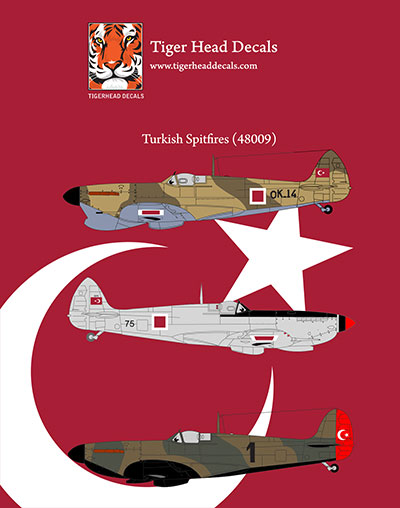 Turkish Spitfires (Tigerhead Decals 72007)
€ 5.74
EU: incl. tax € 6.95
Reduced shipping charge may be applicable depending on country of destination and contents of shopping cart. Will be shown before checkout.Add to cart

This product was added to our database on Thursday 12 September 2013.

The Spitfires designed and produced by the British firm Vickers Supermarine participated the Battle of Britain and most probably they are the most popular fighters of WWII. Different models arrived Turkey at different times. A batch of 15 Spitfire MK.1s were ordered together with the Hawker "Hurricanes" but only 3 of them were delivered. One of them which was an ex-Polish order arrived in Sept.1938. The other two arrived in 1940. Eventhough serials 4501 to 4515 were allocated by the TuAF they were never used. The planes were deployed at the 42nd Hunter Company. Two of them were returned to RAFME in 1942. The Mk.1s were equipped with a Rolls Royce Merlin-2 engine with an output of 1030HP. Their armament consisted of 8 pieces 0.303 caliber MGs. They were distinctive with their 3-blade propeller.

No other Spitfire was supplied until mid-1944. In July 1944 39 pcs Mk.Vb was sent from RAF stocks. This was followed by 71 pcs Mk.Vc's and 3 recce version Mk.V/R came in February 1945. Mk.Vb's were deployed at the 1st and 2nd Co.s of the 5th Regiment, 1st, 2nd and 3rd Co.s of the 6th Regiment. The Mk.V/Rs were used with the "High Altitude Photo-Recce Unit". These models were distinguished with their four-blade propellers. According to the TuAF sources they were equipped with Rolls Royce Merlin-20 engines with an output of 1500 HP. But the British sources state that the Mk.Vb's were equipped with a 1585HP Rolls Royce Merlin 45M engine and the Mk.Vc's with a 1470HP Rolls Royce Merlin 45 engine. The standard armament of the Mk.Vb's were 4 pcs 0.303 caliber MG and 2 pcs 20mm cannon whereas the Mk.Vc's had 4 pcs 20mm cannons and they were capable of carrying a bombload of 500lbs. They were replaced by the P-47 "Thunderbolts" in 1948.

Only one Spitfire M.XI arrived. The exact date of arrival and deployment is not known. It was assigned to "High Altitude Photo-Recce Unit". 4 pcs Mk.XIX were sold to Vickers by the RAF to make the overhaul. These planes were brought to Turkey in March 1947 and they were also deployed at the "High Altitude Photo-Recce Unit". These planes were equipped 2 cameras underneath the fuselage an done each on the port and starboard sides of the fuselage. They were the most powerful Spitfires equipped with a 2035HP Rolls Royce Griffon engine. They are distinctive with their five-blade propeller.