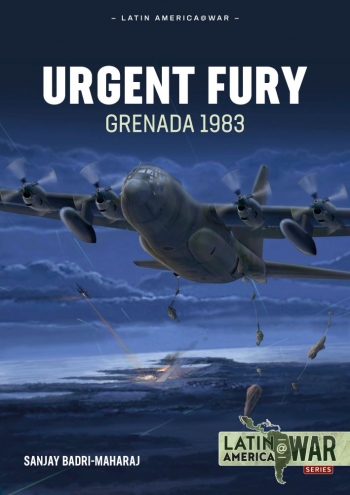 In 1983, the United States launched a military operation to remove the military junta that had taken over the Caribbean island of Grenada. This operation, code-named Urgent Fury, was held out by the Regan Administration as a major military success and a victory against communism. In some ways it was. In others it was a foregone conclusion, a victory against a discredited regime with little support internally or externally.

Operation Urgent Fury examines the genesis of the Grenadian Revolution of 1979 and the eventual fall of the Gairy Regime and establishing the English-speaking Caribbean's only Soviet-bloc client state, albeit a short-lived one, and the rise and fall from grace of the populist Maurice Bishop.

The growth and development of the People's Revolutionary Armed Forces of Grenada is discussed with their strength, weapons and training being examined. Cuba's military and civilian and presence is detailed as well as the tension between Soviet ambitions and Castro's agenda to influence the Grenadan Revolution.

The fall of Bishop's government, his subsequent arrest and murder, along with the popular backlash that this sparked is discussed and the call for intervention is analysed with attention being paid to the role of the Eastern Caribbean States and their contribution towards legitimising the US action.

The planning, preparation and execution of Urgent Fury is detailed with attention being paid to the role of the Regional Security System and the Barbados Defence Force in this process.

Operation Urgent Fury itself is detailed with emphasis on the resistance of Grenadian Forces, despite many not reporting for duty. The political and geopolitical aftermath of Urgent Fury are discussed in conclusion.