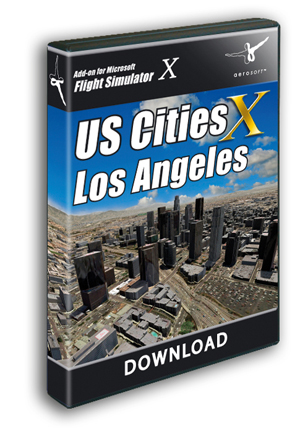 Product description
There is probably no city where you see more aviation than Los Angeles. Not only are there several major airports close to the city but general aviation rules the skies over the city. Besides Alaska there is no state where single engine aircraft are more used and there are more helipads than in any other city. That’s not only because of the rich and famous but also because the layout of the city looks spectacular. From the coastline to the mountains around the city, LA is a great city to see from above. US Cities X is a series of city scenery for FSX that covers US cities created by LimeSim. Based on an extensive aerial image it will have all the major buildings and landmarks plus all the airports and heliports that are inside the covered areas. It is clearly intended to fill the gap between the default scenery and very high dense city scenery such as Manhattan X, London VFR or Venice X. Because the file size is rather large due to the ground image it only includes one season (in most cases this is not a real issue) and no night textures. The VFR flights over these cities are mostly a day time affair anyway. Features: Detailed 3D renderings of the 3 city centers covered by more than 5,000 major buildings: LA Downtown Long Beach Irvine/Santa Ana Aerial image coverage with up to 30cm/pix resolution (see attached Google Earth file) Bonus: Full rendering of Catalina Island with and helipad! Detailed scenery of Catalina’s “Airport in the Sky” with sloped runway! More than 1,050 major buildings included 454,500 (!) autogen objects placed realistically Highly detailed and customized mesh terrain An incredible number of 150 helipads! Among them a few well-known ones as: LAPD Hooper Heliport (largest rooftop heliport in the world. Set location of the "BlueThunder" movie and series) US Bank Helipad (world`s highest rooftop helipad, see this BMW movie) Queen Mary Heliport Catalina Air-Sea Terminal Heliport Catalina Island Pebbly Beach Seaplane Base and Heliport Major airports in and around the city are covered with new high res ground images with customized mesh terrain (no new building structures added with the exception of KAVX): KLAX Los Angeles Intl KBUR Burbank Bob Hope KSNA John Wayne Orange Co KLGB Long Beach KVNY Van Nuys KAVX Catalina "Airport in the Sky" KSMO Santa Monica Mun KSLI Los Alamitos AAF KWHP Whiteman KEMT El Monte KHHR Northrop Hawthorne KCPM Compton Woodley KTOA Zamperini 64CL Goodyear Blimp Base KNTK Tustin MCAS Sound effects like downtown- and highway traffic and animated gulls Animated ships and boats between LA Port and Catalina Island Traffic on most major roads Low price, very good value for money. Just to compare the features of Los Angeles to the average numbers of previous US Cities: 30 times as many helipads! More than 2 times as many airports! More than 5 times as many autogen objects! More than 3 times as many major buildings! Includes a separate Scenery Density Tool, which makes this highly detailed scenery enjoyable on slower systems as well! FSX and Prepar3D version included System requirements: Microsoft Flight Simulator X (SP2, Acceleration Pack or Gold Edition) or Lockheed Martin Prepar3D Windows XP, Windows VISTA, Windows 7 (fully updated) Intel Core 2 Duo E6850 CPU (Core 2 Quad advised) 2 GB RAM Direct X 9 compatible Graphics Card with minimal 512 MB Adobe Acrobat Reader 8 minimal to read and print the manual Download-Size: 2,5 GB Installations-Size: 3 GB