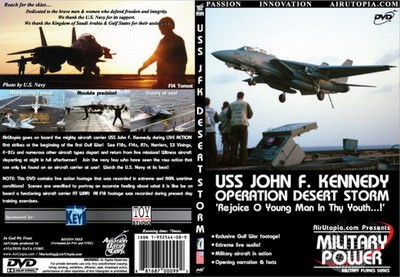 This product was added to our database on Thursday 22 September 2005.

Go where few have been before… on board the Supercarrier USS John F. Kennedy on deck during the first day of action during the Gulf War. Our cameras were the ONLY ones there… feel like you were on board as you watch the 'Live Action' with many unbelievable takeoffs and landings day and some night… watch the intensity and the afterburners! A must see for military & aviation fans! Important Note: Classified scenes are excluded for the protection of the US Navy. (80mns) INCLUDES: Brief Narration – Music Overture – Aircraft Facts – Military Takeoffs/Landings of F14 Tomcats - F18 Hornets – EA6 Prowlers – Harriers – Corsair IIs – Helicopters – COD aircraft – S3 Vikings and more!!! OVERVIEW: Join the AirUtopia film team on board the nuclear powered carrier USS John F. Kennedy during the climactic First Strikes of the war! Go where only few men have gone before and see F18s, F14s, A7 Corsair IIs (since retired), CODs, Harriers Jump Jets, Helicopters, S3 Vikings, Awacs… takeoff and return from their dangerous missions. Catch even some night takeoffs and see the stunning afterburners… the action will be breathtaking as very few have seen the raw action of a carrier at war! Watch the US Navy at its finest hour and watch many planes close-up! Warning: This film contains raw action that contains shaking as it was taken in extreme conditions… many scenes are shot and unedited to give the best feel of the exciting experience on the aircraft carrier! INTERESTING FACTS: Built in 1964 and named after 35th president of the USA. Carries 69 aircraft & over 5,000 personel USS JFK carrier planes shot down 2 Libyan Mig 23s in 1989. INTERESTING DATA: On January 4, 1989, while conducting routine operations in international waters, F-14s from the embarked air wing shot down two Libyan MIG-23s that were approaching the battle group in a hostile mannerUSS JOHN F. KENNEDY (CV 67) was named for the 35th President of the United States.The ship's keel was laid October 22, 1964, at the Newport News Shipbuilding and Drydock Company in Virginia.USS JFK entered the Red Sea in September 1990 and became the flagship of the Commander, Red Sea Battle Force On January 16, 1991, aircraft from the ship's Carrier Air Wing THREE began Operation Desert Storm with attacks on Iraqi forces. The ship launched 114 strikes and 2,895 sorties, with the aircrews of CVW-3 flying 11,263 combat hours and delivering more than 3.5 million pounds of ordnance in the conflict. There are 5.222 men and women on board Max. speed: More than 30 knots (cca 55 km/hr) Carries 69 aircraft plus! Film includes: - Live Audio - Music Overture - Many Takeoffs and Landings - Brief Narration (English Subtitles) - Historical Facts & Captions - Video Slide Show