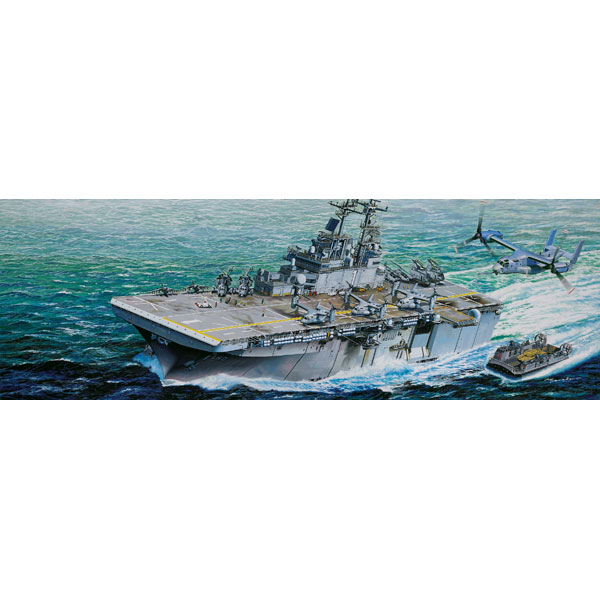 This product was added to our database on Wednesday 9 November 2011.

Launched by the US navy in 1989, the U.S.S. WASP (LHD-1) is the first ship of the new class of multipurpose amphibious assault ships. Seven more vessels of the WASP class followed up to 2009. These ships, relaying the old Tarawa Class, can carry up to 40 helicopters and V/STOL (vertical/short takeoff and landing) aircraft as well as up to 1.894 marines. Furthermore, this "floating dock" arries several landing crafts to bring vehicles and personal to the landing beach. The main mission of these units is supporting the landing operations of the US Navy. But they can also be used for humanitarian or rescue operations. The U.S.S. Wasp is fitted with a continuous, 257.2 m long, flight deck. Maximum speed 20 knots. Crew: 104 officers and 1.004 enlisted. Her medical facilities are capable of providing intensive medical assistance to 600 casualties, in four main and two emergency operating rooms. The U.S.S. Wasp model is composed of 1.349 parts ensuring a top quality reproduction. Photo etched components are included for the railings and for the radar equipment. The flight deck, in one piece, is a perfect fit to the hull. The vehicle hold, the aircraft hangar and the docking area are superbly represented. M1A1 and M60 tanks, some AAV7, HMMWV and lorries are provided to load the Landing Craft - Air Cushion (LCAC) hovercraft and the landing barges (LCU) included in the kit. Following aircraft or helicopters are included: AH-1W Super Cobra, CH-53E Sea Stallion, CH-46 Sea Knight, AV-8B Harrier II and MV-22A Osprey. Included are two lateral lifts, to fit in any position, to bring them to the flight deck. The highly detailed superstructures include radar and electronic equipments fitted on two masts. The well detailed armament includes RIM-7 Sea Sparrow, RIM-116 RAM, Phalanx CIWS and several cannons and machine-guns. The decal sheet includes various details for the ship, the aircraft and the helicopters as well as for the landing barges.