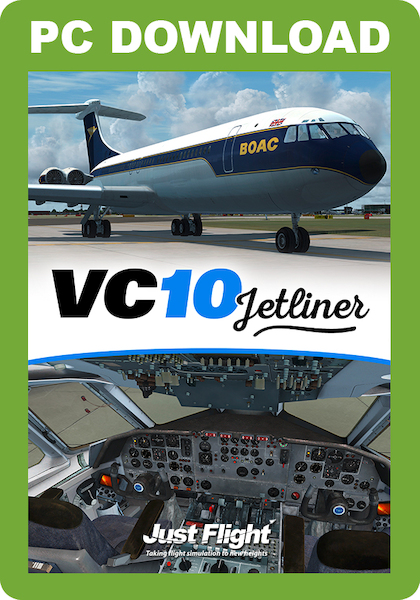 The VC10 is widely regarded as one of the most graceful jet airliners ever created, with its long slim fuselage, clean angled-back wings and graceful swept-back tail surfaces. The aircraft was designed by Vickers-Armstrongs to fly on long-distance BOAC routes between the UK and Africa, which required an aircraft capable of operating from hot airports at high altitudes with short runways. This resulted in an aircraft with superb performance, second only to the supersonic Concorde in terms of speed for a jet airliner.

VC10 Jetliner for Flight Simulator X and Prepar3D includes an accurately modelled Type 1101 (known as the BOAC Standard variant) variant in 10 liveries, including a variety of BOAC and British Airways schemes.

The VC10 is brought to life with distinctive Rolls-Royce Conway engine sounds and realistic and accurate flight dynamics based on real-world performance and handling data as well as input from ex-VC10 crew.

See the Detailed Description below for the full list of features!

What is the Jetliner product range?

Following the success of our F-Lite (highly detailed but simplified systems) and Professional (study sim, complex systems) product ranges, the Jetliner range was introduced to offer aircraft that sit between these two ranges. At the core of all our aircraft are highly realistic and detailed models, featuring numerous animations and accompanied by authentic flight dynamics and sounds. The Jetliner range of aircraft features aircraft and cockpit systems which retain the ease of use of those found in F-Lite aircraft but with greater depth and complexity for key systems such as the autopilot, fuel and engine start systems.

The Jetliner range offers the perfect stepping stone for virtual pilots looking to transition from F-Lite to Professional, as well as being ideally suited to those at any experience level.

Two more products in the VC10 family - the Super/RAF Expansion Pack and VC10 Professional - are currently in development. The Super/RAF VC10 expansion will include the Super VC10 and RAF (C1 transport and K tanker) variants. VC10 Professional will add further systems complexity and management for those who enjoy study-sim level airliners.

Both products are scheduled for a 2018 release and more details will be made available over the coming months. Existing owners of VC10 Jetliner will be eligible for a discounted price when purchasing VC10 Professional.

COCKPIT:
3D cockpit with virtually all the hundreds of switches, knobs and levers animated and functional. Many gauges are modelled in 3D for smooth operation.
All four flight crew positions modelled (Captain, Co-Pilot, Flight Engineer and Navigator)
Cockpit textures feature wear and tear to produce an authentic environment
Cockpit lighting with atmospheric instrument backlighting
Special 'baked' textures have been used to present a well-used look and feel to the cockpit area and controls
Fully modelled Flight Engineer station with fuel, engine, electrical, anti-ice and hydraulic controls (automatically configured in a 'ready for take-off' state when the aircraft is first loaded, allowing you to get airborne within seconds)
Many features have been added to help with usability such as a switch to hide the control yokes for a better view of the instruments and pre-set angled views for the overhead panel, centre pedestal and Flight Engineer station
Animated Captain's arm-rest for improved visibility of centre pedestal
Ability to integrate third-party weather radar
Split flap/slat lever with the ability to extend slats without deploying flaps
NAV 1/2 and ADF 1/2 radios feeding CDIs, VOR and ADF indicators for easy navigation
GPS unit included for easy navigation
Numerous warning annunciators will illuminate on fault detection and a functional engine fire warning and protection/extinguishing system are built into the cockpit
Animated cockpit side windows

OTHER FEATURES:
Realistic and accurate flight dynamics based on real-world performance and handling data, and input from ex-VC10 crew
The distinctive Rolls-Royce Conway engines have been captured to give the utmost realism in full stereo
Comprehensive manual with panel guide and tutorial
PSD Paint Kit included so you can create your own paint schemes

DEMO:
This fully featured demo for FSX and Prepar3D is limited to ten minutes of flying time and 3000ft AGL, and includes one livery (Just Flight house livery). Please note that this demo must be uninstalled prior to installing the full product. Download VC10 Demo