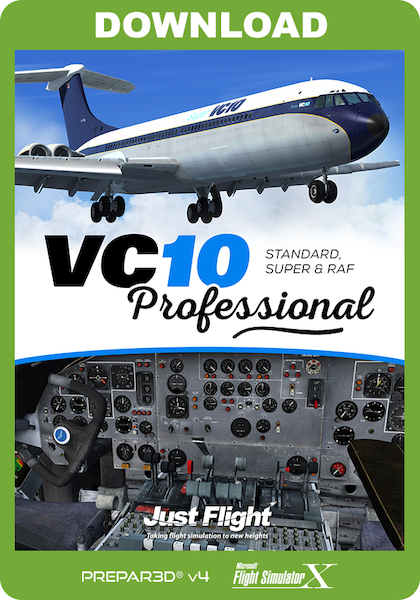 This product is available for download immediately after confirmation of receipt of payment. By accepting our terms and conditions confirms that the statutory 14 days right of withdrawal for internet purchasesábyáEU residents will not be applicable to this product and the buyer waives his right of recall.

The VC10 is widely regarded as one of the most graceful jet airliners ever created, with its long slim fuselage, clean angled-back wings and graceful swept-back tail surfaces. The aircraft was designed by Vickers-Armstrongs to fly on long-distance BOAC routes between the UK and Africa and needed to be able to operate from hot and high airports with short runways. This resulted in an aircraft with superb performance, second only to the supersonic Concorde in terms of speed for a jet airliner. The VC10 was introduced into RAF service in 1965, operating in the transport, cargo and in-flight refuelling roles, until its retirement in 2013, nearly 50 years later. VC10 Professional for FSX and P3D includes accurately modelled Standard and Super civilian variants and C1K, K3 and K4 military variants of the VC10 in a variety of liveries covering their time in airline and RAF service. The detailed virtual cockpit features 3D instruments, authentic wear and tear and all four flight crew positions (Captain, Co-Pilot, Flight Engineer and Navigator) modelled in high detail. Comprehensive but easy-to-use systems are simulated, including a realistic fuel system with transfer and jettison functionality, an autopilot with pitch and bank hold, an autothrottle with IAS and MACH hold capabilities and simulated powered flying control units (PFCUs). Realistic engine start procedures are possible with ground air supply and cross-bleed, and autostart (Ctrl+E) compatibility allows you to get airborne quickly. Custom-coded electrical, fuel, hydraulic, pressurisation and navigation systems, including a new Delco Carousel IV-A Inertial Navigation System (INS) unit, will keep even experienced pilots busy! The VC10 is brought to life with distinctive Rolls-Royce Conway engine sounds and accurate flight dynamics based on input from ex-VC10 crew and real-world performance and handling data.

COCKPIT:
3D cockpit with virtually all the hundreds of switches, knobs and levers animated and functional. Many gauges are modelled in 3D for smooth operation. All four flight crew positions modelled (Captain, Co-Pilot, Flight Engineer and Navigator) Cockpit textures feature wear and tear to produce an authentic environment Cockpit lighting with atmospheric instrument backlighting Special 'baked' textures have been used to present a well-used look and feel to the cockpit area and controls Fully modelled Flight Engineer station with fuel, engine, electrical, anti-ice and hydraulic controls (automatically configured in a 'ready for take-off' state when the aircraft is first loaded, allowing you to get airborne within seconds) Many features have been added to help with usability such as a switch to hide the control yokes for a better view of the instruments and pre-set angled views for the overhead panel, centre pedestal and Flight Engineer station Animated Captain's arm-rest for improved visibility of centre pedestal Ability to integrate third-party weather radar Split flap/slat lever with the ability to extend slats without deploying flaps NAV 1/2 and ADF 1/2 radios feeding CDIs, VOR and ADF indicators for easy navigation GPS unit included for easy navigation Numerous warning annunciators will illuminate on fault detection and a functional engine fire warning and protection/extinguishing system are built into the cockpit Animated cockpit side windows

LIVERIES:
Each variant is supplied in a wide variety of liveries covering its time in airline and military service.

OTHER FEATURES:
Realistic and accurate flight dynamics based on real world performance and handling data, and input from ex-VC10 crew The distinctive Rolls-Royce Conway engines have been captured to give the utmost realism in full stereo Comprehensive PDF manual with panel guide and tutorial PSD Paint Kit included so you can create your own paint schemes