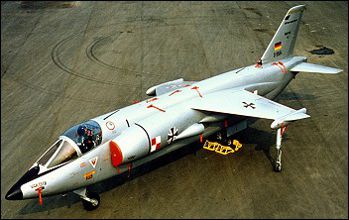 This product was added to our database on Tuesday 1 july 2014.

In 1962, the West German government launched an requirement for the new ground attack fighter to replace the Fiat G.91. In the meantime NATO had launched a program for VTOL combat aircrafts. The Germans decided to work on the second VTOL fighter. After consideration of various options, the effort focused on the Focke-Wulf Fw.1262 design. This was further developed in a partnership of VFW and Fiat to became VAK-191, a nuclear strike attacker. In 1966, NATO having lost interest in the VTOL aircrafts development. By that time, Fiat withdrew the program. The VAK-191B became a technology demonstrator. It had been planned that six prototypes of the VAK-191 should be built, but only three were actually completed. The first hovering flight was made in September 1971. The first transition from vertical flight to horizontal and vice versa was achieved in October 1972. The prototypes were used to test some of the concepts in what was to become the Panavia Tornado programme, including 'fly-by-wire' technology