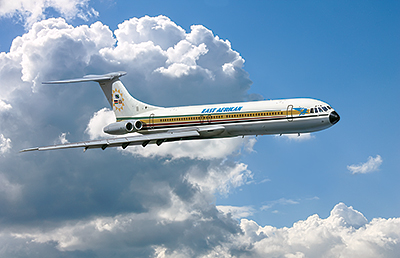 This product was added to our database on Wednesday 23 March 2016.

The VC10 or to use its correct title the Vickers Commercial 10 was a long range British Airliner designed and built by Vickers and first flew in 1962. The aircraft had a high subsonic speed and was specially designed to use 'Hot & High' Airports such as Nairobi on the African routes.
The fist Super VC10 that is the subject of this model was13ft 0in (3.96 m) longer, had upgraded Conway engines, an additional fuel tank in the fin and first flew in service on the 7th of May 1964 with BOAC.
The mainstays of the BOAC fleet in the late 1950's and early 1960'-s were the DH Comet 4, Boeing 707 and the Bristol Britannia.
In the early 1950's Vickers at Weybridge were working on designs for a 4 engine jet airliner, known as the V1000, similar in layout to the DH Comet. It was a more modern design, featuring a wider fuselage, slotted flaps and had much better performance. Initial orders were for the Royal Air Force (RAF) and a civil version, the VC 7. Defence cuts in 1955 saw the project cancelled.
BOAC in the meantime ordered 15 Boeing 707'-s which proved oversized and underpowered for it-'s 'Hot & High' routes in Africa and Asia.
Several major companies including De Havilland and Handley Page offered suitable replacements but following route evaluation BOAC opted for the VC10 from Vickers.
On entering service the VC10 was a hit with both pilots and more importantly, the passengers. BOAC capitalised on this and soon part of the Airlines advertising came up with several very clever slogans with 'Swift and Silent' as well as 'A little VC10derness' being two of the best examples.
Britain's postal service, the Royal Mail, used a VC10 silhouette as its Air Letter logo for many years.
Interestingly, the VC10's introduction on the trans-Atlantic services showed a 40% increase over the Boeing 707'-s that were operating on those routes at the time.
Passengers quickly became accustomed to a silent cabin due to the rear mounted engines and state-of-the-art seating. BOAC's First Class service was soon the preferred choice of travel for the rich and famous. A short-lived BOAC and Cunard cooperation also added to the then luxury travel market.
East African Airways (the subject of this model) operated five Super VC'-s from its routes from Nairobi EAA was a joint company of Kenya, Tanzania and Uganda. It was the main African-based airline, operating routes around the world.
The Super VC10 was ideally suited to this Airline. One amusing story is that East African named their VC10'-s 'Jambo Jet'-s' (Jambo being a greeting in Swahili). This may have been in response to the Boeing 747 that was then coming into service.
Markings for: