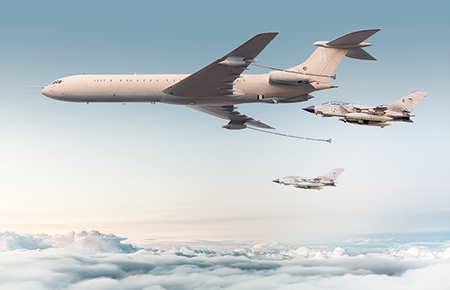 This product was added to our database on Monday 6 June 2016.

The Vickers VC10 Airliner was designed in the late 1950's and its first flight was on the 29th June 1962.The aircraft was designed for long haul and transatlantic flights and was capable of Hot & High operations on the African routes It held several sub-sonic speed records on the Transatlantic routes only beaten by Concord. The VC10 was held in very high regard by both Crew and the passengers who flew on it. The rear engined layout of the VC10 made for a quiet cabin and its efficient wings gave it a very smooth ride in turbulence. These qualities actually caused passengers to request the VC10 when given the choice, and BOAC used this to its advantage when advertising with the phrases 'Swift and silent' and 'A little VC10derness' the main operators were BOAC & East African Airways.
The introduction in the 1970's of wide bodied Airliners such as the 747 Jumbo saw the VC10 becoming uneconomical to operate which led to its withdrawal from passenger service. The final Commercial flight of a VC10 was on the 30th March 1981, by British Airways (the successor to BOAC) this ended the civil side of the story, but it certainly didn't end the story of the VC10 as its military Career with the Royal Air force was only just beginning.
The RAF had first started operating VC10's in 1966 with No 10 Squadron in the Transport and VIP role operating Worldwide; The VC10 had the honour on many occasions to Transport Her Majesty Queen Elizabeth and other members of the Royal family, as well as Government ministers and Military chiefs, although its main task was troop carrying as well as disaster relief flight and medical evacuation.
In 1977 the RAF acquired the recently retired BOAC & East African aircraft to meet its Air to Air refuelling requirements. A total of 4 aircraft were converted to K3 Tankers (the subject of this model) The K3 was equipped with fuselage fuel tanks, mounted in the former passenger compartment, and could carry up to 78 tonnes of fuel. The K3 was a three-point tanker, with fuel being dispensed from the two wing-hoses (pods) or from the single fuselage-mounted Hose Drum Unit (HDU). The wing hoses could transfer fuel at up to 1000kgs per minute and were used to refuel tactical fast-jet aircraft. The HDU could transfer fuel up to 2000kgs per minute and was usually used to refuel 'heavy' strategic aircraft, although it could also be used by fast-jet aircraft. The aircraft was also fitted with a nose mounted refueling probe.
The VC10 served in all recent Major conflicts including the Falklands war in 1982 in which it also refueled the Vulcan bomber sent to bomb Stanley Airfield (operation Black Buck) In 1991 VC10's were part of operation desert storm and later they saw action in Afghanistan against the Taliban as well as Refueling NATO aircraft during the air-strikes against Serbia. The last operations the VC10's took part in was Libya in 2011.
In 2013 the RAF retired it VC10's from Military service, replacing them with the Airbus A330 MRTT Tanker. The final flight of a VC10 was on the 25th September 2013. The VC10 has taken its place in History and several are preserved in UK Museums. A fitting retirement, for a true RAF Veteran.