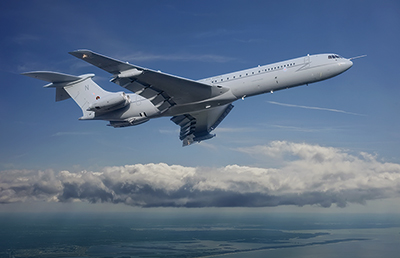 This product was added to our database on Tuesday 21 March 2017.

The Vickers VC10 Airliner was designed in the late 1950's and its first flight was on the 29th June 1962.The aircraft was designed for long haul and transatlantic flights and was capable of Hot & High operations on the African routes It held several sub-sonic speed records on the Transatlantic routes only beaten by Concord. The VC10 was held in very high regard by both Crew and the passengers who flew on it. The rear engined layout of the VC10 made for a quiet cabin and its efficient wings gave it a very smooth ride in turbulence. These qualities actually caused passengers to request the VC10 when given the choice, and BOAC used this to its advantage when advertising with the phrases 'Swift and silent' and 'A little VC10derness' the main operators were BOAC & East African Airways
The introduction in the 1970's of wide bodied Airliners such as the 747 Jumbo saw the VC10 becoming uneconomical to operate which led to its withdrawal from passenger service. The final Commercial flight of a VC10 was on the 30th March 1981, by British Airways (the successor to BOAC) this ended the civil side of the story, but it certainly didn't end the story of the VC10 as its military Career with the Royal Air force was only just beginning.
The other airframes gained a perhaps less glamorous, but nevertheless a very important role - the Royal Air Force's Avro Vulcan strategic bombers needed air refueling when conducting long distance missions, and the VC10 was very suitable for this role, especially considering its high speed and impressive endurance. In the late 1970s, tankers of the C Mk 1 Ks and K3 modifications entered into service with the Royal Air Force, and in the early 1990s, immediately after Operation Desert Storm and the withdrawal of the Handley Page Victor refueler from structure of the Air Force, for the role of air tanker five former passenger VC10s were converted, and designated the K4. Compared with their predecessor the K3, as well as in the K2 version, the fuselage fuel tanks were absent. Visually, the K4 differed from the K3 in lacking the broad side door in the front part of the fuselage due to
having no need to replace the fuselage’s fuel tanks. Overall, the conversion to the K4 variant was undertaken on five former passenger airliners.
Since the late 1990s, this type of aircraft took part in a variety of different scale conflicts in many parts of the world, including air strikes against Serbia, in the Second Iraq War (Operation Telic), and in air strikes against the Gaddafi regime in Libya. In 2013 the Royal Air Force made the decision to remove the VC10 from active service, having adopted the program of their replacement by the new A330MRRT tanker. Now the K4 tankers which were already considered obsolete have been completely retired from service, and sent for dismantling.