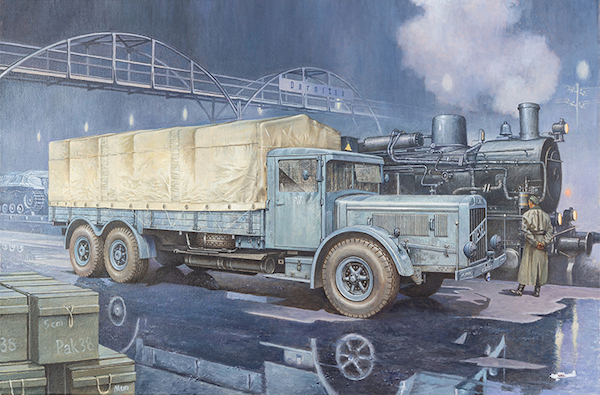 This product was added to our database on Tuesday 20 August 2019.

The German automotive firm Vogtländische Maschinenfabrik AG (VOMAG) was established at the turn of the 19th and 20th centuries, when an increasing number of different mechanical factories and enterprises turned their attention to the promising production of self-propelled carriages at that time. During the next 10 years, VOMAG has built several successful trucks, and since the beginning of the First World War, it has received a significant order from the military for the supply of three-tone trucks to the Army.
However, with the end of the First World War and the catastrophic consequences of articles on the surrender of Germany, VOMAG, like many other military-oriented enterprises, could no longer produce military equipment. Releasing a large part of the workers in 1918, VOMAG was re-owned as VOMAG Lastkraftwagen GmbH München.
In the 1920s, VOMAG concentrated its efforts on the production of municipal transport, since it allowed to receive regular orders from various municipalities from all regions of Germany. However, the production of trucks, too, was not stopped completely. The company concentrated its efforts on maximizing the specifics of orders and one of the first offered a truck of large dimensions with a three-dimensional scheme. This allowed to significantly increase the carrying capacity (up to 10-11 tons) and make the body part of the truck particularly dimensional in view of the possibility of transportation of super-large cargoes.
Even with the advent of German militarist nationalist socialists in the early 1930s and the gradual reversal of the entire economy to the production of dual-use goods (which could equally be used both in civilian and military use), VOMAG continued to manufacture machinery primarily for civilian needs. Its trucks, created in the middle of the 1930s, were the true rulers of the newly built highways throughout the country, and allowed the transportation of over-large cargo to any corner of the country.
One of these machines was a three-axle truck VOMAG 8LR, created in 1935. On its time, it was almost an engineering masterpiece, but in the next few years only 100 trucks of this type managed to be built, since VOMAG, like all other leading giants of the heavy industry, was increasingly involved in the execution of military orders due to the inevitability of a big war in Europe in the coming years.
With the start of the World War the Second, almost all VOMAG 8LRs, like other trucks, were requisitioned for the needs of the army. And if in the first months of the Blitzkrieg, when hostilities took place in Western Europe, they easily performed their tasks, since they moved cars only on beautifully covered roads, then with the start of the Eastern campaign, and especially after the attack on the USSR, their further fate proved to be fatal.
The complex engineering solutions laid down in the design of the suspension of the "king of the highways" were insignificant in the conditions of the Soviet off-road and the complete absence of normal road coverage. VOMAG 8LR one after another began to fail and was constantly in a state of repair, and already in 1942 their use was very limited under the conditions of conducting the Eastern Campaign of the Wehrmacht. Attempts to rebuild a truck on a technical support vehicle were few and not very successful. The latest known fact of the use of VOMAG 8LR in the territory of the USSR troops and the Verkhama is dated 1943, after which these giants, like ancient prehistoric animals, disappeared forever, remaining only in small photographs of the prewar years and the first years of the war.