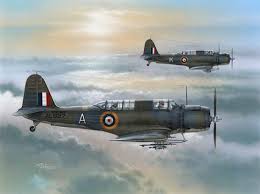 This product was added to our database on Thursday 24 October 2013.

Vought V-156B Chesapeake Mk.I. In 1940, modified machines with V-156 designation and with dive brakes on their wings, identical to the first prototype, were ordered by France and used for defence of its territory. Three French orders were accepted by Vought factory. Planes from the last one of them, however, were modified further and delivered to another customer, that was the UK. V-156s modified according to British requirements were designated as V-156B Chesapeake Mk.I and were evaluated with No.811 Fleet Air Arm squadron as well as with some second line units. Due to unclear requirements and ideas - planes intended for dive-bombing were to be deployed from escort carrier ships for fighter duties - were never used in real figtings and ended their career with second line units. All that despite the fact, that they outperformed any other bomber plane available to FAA at the time. The British Chesapeake plane stood somewhere between the SB2U-2 and SB2U-3 versions and that is why the model contains the former version wing and fuselage parts of the latter. The rest of the parts is the same. The decals cover three No.811 sqn machines and one of 15 MU.