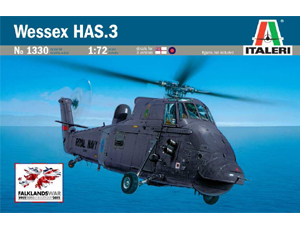 This product was added to our database on Wednesday 11 April 2012.

The Wessex HAS.3 was an improved version of the previous HAS.1 helicopter. Between 1965 and 1968, forty-three HAS.1 models were upgraded to the new standard, easily recognizable for the dorsal dome of the search radar that gave the HAS.3 its nickname Camel. Apart from this aspect, the modifications focused mainly on the flight stabilization system and the mission equipment, including the more effective Plessey sonar. The weaponry for anti-submarine missions typically consisted of Mk.44 or Mk.46 torpedoes, or Mk.11 depth charges. Starting in the mid-1970s, the Wessex HAS.3 was gradually replaced by the Sea King, though it remained in service long enough to participate in the Falklands War.

The event that triggered the conflict in the South Atlantic was the occupation of South Georgia by Argentina on 19 March 1982. This was followed by the occupation of the Falkland Islands beginning on 2 April and ending with the Argentinean forces surrendering on 14 June 1982.

Although described mostly as a 'war', there was never an official declaration as such by either side throughout the conflict. The British naval task force engaged the Argentinean Navy and Air Force and retook possession of the Islands by amphibious assault and combat that resulted in the loss of 258 British and 649 Argentinean servicemen.

Harriers and Sea Harriers formed the strike element of the South Atlantic Task Force comprising elements from Nos.800 and 899 Naval Air Squadron (NAS) on HMS Hermes, and Nos.801 and 899 NAS on board HMS Invincible supported by twelve Harriers GR Mk 3s from No.1 Squadron Royal Air Force (RAF). Initial strikes by Harriers on 1 May 1982, following the opening attack by Vulcans on Port Stanley airport, damaged and destroyed a considerable number of aircraft on the ground. Throughout the conflict Sea Harriers flew 1,435 sorties while RAF Harriers flew 126 sorties.

The Wessex helicopter also contributed greatly to the outcome of the conflict. HU Mk 5s with the South Atlantic Task Force came from Nos.845, 847 and 848 NAS operating from HMS Endurance and most of the other Royal Fleet Auxiliary (RFA) ships in the task force. A pair of HAS Mk 3 Wessex were also deployed, coming from No.737 NAS flying mostly from HMS Antrim and HMS Glamorgan. HU Mk 5 XS518 of No.847 NAS claimed the sinking of the Argentinean submarine Santa Fe.